Barbie might be an icon, but she’s also a hot button topic for controversy. Some say the blond bombshell is all in good fun, while others think she sends the wrong message to little girls. What do moms think? 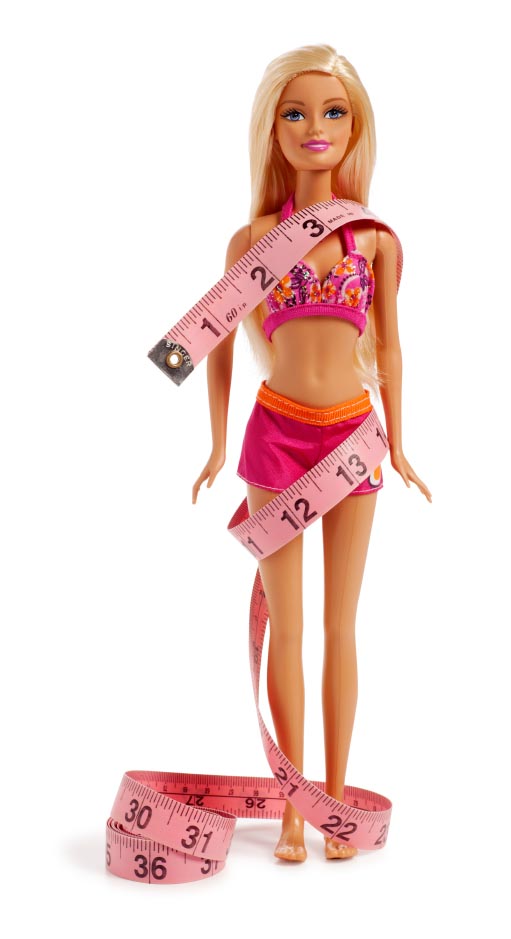 Barbie is a classic. After 52 years, she has been played with by generations of girls and has held many jobs from astronaut to beauty queen. She has a menagerie of pets, a collection of homes and countless cars. And she and Ken? They’re back on again.

But despite the playful nature of Barbie, all is not California dreams and cushy dream houses. In fact, the iconic toy has drawn much criticism and controversy over the years for her unreal proportions.

Though she is a mere plastic figure, Barbie often comes under fire for her body proportions. If Barbie was human, she would be roughly 6 feet tall, with an unreal 36-inch chest, 18-inch waist and 33-inch hips, according to SFGate.

What would that look like in real like? An Oregon teen, Galia Slayen, who battled an eating disorder, found out when she built a life-size version of Barbie. Basically, Barbie would have a shockingly slim waist, gigantic breasts and trim hips, thighs and calves.

Is it really unusual? Yes. Totally unrealistic? Not exactly — Pamela Anderson, who is 5’7″, reportedly measured 36-22-34 and was 105 pounds when she was Miss February 1990 for Playboy.

Slayen says that the shocking image of a real life Barbie is a good get-your-attention point for talking about eating disorders. So does that mean that playing with Barbie can lead to a bad body image?

It’s interesting that people try to associate Barbie with body image. Given that she’s being used as a conduit for discussing eating disorders, that would be a logical conclusion…except, I don’t think she is. And I encourage my daughter to play with her Barbies.

Just this morning, my three-year-old dragged me into her room to play with Barbie in the Dream Townhouse she received for her birthday this year. I did, pretending to take a dip in the jacuzzi, eat some mighty-fine looking turkey and dance in the living room. But never in our play did my daughter misinterpret pretend for real life.

The fact is that Barbie is a toy. She’s not real. She’s not human. And we aren’t going to see a real Barbie walking down any street.

Playing with Barbie isn’t really any different than playing with a Superman action figure, Lego Star Wars characters or any other toys. Kids create a fantasy world surrounding their toys, and pretend their way through play. I’m no more worried that my son will actually think he can become a Lego Storm Trooper with a head that pops off than I am that my daughter will think she needs to look like Barbie.

More than a body

Barbie as an icon isn’t just a body — she’s a doll who’s traveled, held many careers and is successful. And those things have garnered her some fans.

Catherine Montgomery, a 31-year-old step-mother to two girls and aunt to a niece, says that she loves Barbie and the positive messages she sends.

“While I understand people’s issues with Barbie, I have to disagree with the idea that she’s bad for a girl’s self image. I remember as a child wanting to look like Barbie when I grew up, mostly because I thought Barbie looked like a more glamorous version of my mom… She had a million careers and didn’t need Ken,” says Montgomery. She hopes the girls in her life do play with Barbie. “Barbie is not just an example of what a woman is (hips and butt), but what a woman can be. In 50 years, she has had 126 careers, even more clothes and shoes, and she did it all on her own. How many other dolls can boast that?”

>> Promoting an unhealthy ideal: Barbie and Hollywood vs. reality

Julee Morrison agrees. “Barbie represents a can-do spirit. Her plastic mold captures the imagination of my girls. Through Barbie, my girls drive to exotic places, they create elaborate twenty course meals and serve it graciously to Skipper and Ken and other Barbie friends. They dress in stunning evening attire and capture the heart of the Prince at every Royal Ball,” says Morrison.

It’s not about her measurements, but about what she does. “Barbie is a great role model. She represents dreams and the future. It’s the adults who are caught up in her measurements, her beauty and her perfection that are judging the doll by its cover,” says Morrison.

>> What do you think? Share your opinion in the comments section below