Ashton Kutcher and Demi Moore’s ‘Real Men Don’t Buy Girls’ campaign is being criticized by some close to the issue. 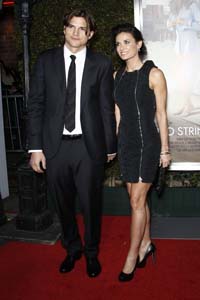 Ashton Kutcher and Demi Moore are attempting to bring public awareness to a very real and serious issue: the trafficking of children into slavery around the world.

The issue is as widespread as it is serious: In 2008, the United Nations estimated that 2.5 million people from 127 countries have been trafficking to 137 countries to be exploited for sex, labor and forced marriages, among other things.

Kutcher and Moore launched the DNA Foundation to bring their brand of awareness to human trafficking – and now they’ve enlisted a few of their Hollywood friends to star in their Real Men Don’t Buy Girls PSA campaign.

The PSAs – featuring everyone from Sean Penn to Bradley Cooper – are meant to catch attention. However, the PSAs aren’t getting the type of attention they expected.

“This is what happens when celebrities do an issue divorced from the movement. Once you chose an issue and don’t do it in collaboration with people who have been doing this for a long time, this is what you end up with,” Norma Ramos, Executive Director of the Coalition Against Trafficking in Women told Fox News. “There is a general dumbing down that is going on and this is an example of dumbing down a social justice movement with the narrowest message possible.”

Wondering why the PSAs are taking a comical approach to the issue of human trafficking? So is Ramos. She told Fox News that comedy isn’t going to capture the attention of the right people – the pedophiles using these young children for sexual purposes. She’s especially upset with one PSA that shows actor Jamie Foxx watching an episode of The Apprentice.

“Donald Trump is CEO of a beauty pageant which simply fosters reducing women to sex objects. Once you reduce a human being to a thing they become disposable and putting him in this category of people,” Ramos said. “I would have chosen the men a little more carefully.”

PSAs aside, it does look like Kutcher and Moore have their hearts in the right place.

“Modern-day slavery is such a complicated issue, but we’re trying to do what we can to make men think twice before they engage in this,” Moore told USA Today. “The message to the guys is, these girls aren’t who you think they are.”

“When we looked for a subject where we could really help people and found this, I was seized by a feeling of wanting to find the guy who is raping a 7-year-old girl and just beat the (expletive) out of him, really take his guts out,” Kutcher told USA Today in the same interview. “Well, that feeling won’t change for me five or 10 or 20 years from now …So whether I’m tackling this on a large platform or am just a guy with a sign, I’ll be doing this in 20 years.”

Do you think Ashton Kutcher and Demi Moore are doing the right thing? Or, are they doing more harm than good?