Over the past few years, the US has seen been the steepest decline of births in the last three decades. How is this affecting parenthood plans — and what are parents saying is the reason behind the change? 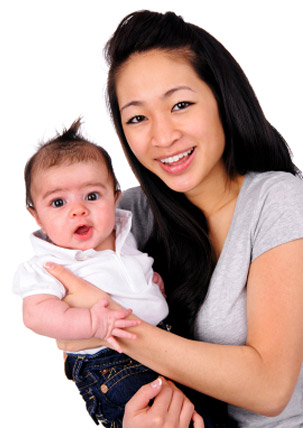 From Natalie Portman to Tori Spelling to Tina Fey, Hollywood is having its own baby boom, it seems. And heck, aren’t a few people you know pregnant, too?

It might seem like everyone you see is pregnant right now, but the truth is that births are down. In fact, a recent report from the Center for Disease and Prevention’s National Center for Health Statistics revealed that the number of births dropped by 4 percent between 2007 and 2009. That’s the biggest two-year decrease in the number of births in 30 years.

>> Baby lust! Should you have another baby?

Experts say that the decline in births seems to be influenced by the economic decline of recent years — which seems to make sense. But for some parents, that’s not the only reason… and maybe finances don’t have any impact at all.

We asked parents who’ve decided against more kids why they aren’t getting pregnant again.

For some parents, the economy has altered their family planning. Valerie Riley of Gainesville, Florida, wanted to have two girls and a boy. But she and her husband have decided to stop after having a girl and a boy. “Just after my son was born in 2007, the economy died. My husband is in real estate in Florida. Needless to say, we hit on hard times,” says Riley. “About the time I would have been looking to get pregnant, I instead went back to work full time (I had been working reduced hours) and we were tightening our belts.”

>> Can you afford a baby? Financial tips for parents

Although they could afford it now, Riley says that since she’s now over age 35, she doesn’t want the increased risks. “So, we are done with two. Luckily, my daughter has a girl cousin and some great neighborhood girls… but I still wish she had a sister, too!”

Heather Lopez is also a mom of two, who has decided against any more children. The economy was among her deciding factors. “The economy is so unstable. It is better to conserve resources and not try to support many kids on very little money,” says Lopez.

Beyond the economy, some parents are choosing to stop having kids for health reasons. For Lopez, health was another big factor in her decision not to have more children. “I get a blood condition called gestational thrombocytopenia when pregnant, which makes it very risky for me to give birth,” she says. “The last time my platelets were so low, they couldn’t even give me an epidural — I had to have general anesthesia.”

>> What is Rh negative blood?

“My second son has autism, and I feel pretty sure there’s a strong genetic component to that,” says Nicola F, a mom from California. “After we got his diagnosis, the idea of more children really seemed like a gamble.” She adds, “Not only might we very possibly end up with another autistic child, but even if that baby was completely ‘typical,’ he or she would still take minimize the amount of time I had to spend with my first kids — especially when you factor in extra energy for my son who’s on the spectrum.”

There is a certain freedom that comes with when children hit the late elementary school and junior high years. And once you get to that point, turning around and doing it all again doesn’t sound like the best idea. For dad of two Chris M Kline and his wife, the plan was always to have two kids… but they did think about having one more to try for a girl. Ultimately, though, they decided to stick to their plan.

>> Another child? Is Dad ready?

“We got to the point where we could travel freely with our boys and having a new born would have put a damper on that. If we had a new child, by the time he or she was old enough for travelling, we feared our oldest son would be at the age where it wasn’t ‘cool’ to be with mom and dad,” says Kline.

More about having another child – or not