James Marsden sat down with us to talk about his new movie Hop, co-starring Russell Brand, Kaley Cuoco, Hank Azaria and Hugh Laurie. The Enchanted actor reveals how he keeps the magic of Easter alive for his two children, as well as behind-the-scenes scoop on working with the hilarious Chelsea Handler. 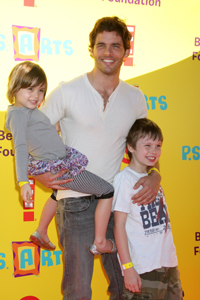 James Marsden is like the cute boy-next-door meets Hollywood hunk– although I could be a little partial since we both are Oklahoma natives. He has appeared as Cyclops in X-Men, a prince in Enchanted and a crazy hot tub guy in Modern Family and his most recent role in the movie Hop has him co-starring with the Easter bunny.

James Marsden was warm, open and seemed to light up when talking about his two kids, 10-year-old Jack Holden and 5-year-old Mary. In the movie Hop, Marsden plays Fred, a somewhat lost soul who finds a kindred spirit in E.B., voiced by Russell Brand. This movie does a great job of mixing live action with amazing animation—and Marsden sat down in a roundtable disscusion to give us the inside scoop.

Did you have any favorite scenes to film in the movie?

James Marsden: The physical comedy — I always love to do and that brings me back to my childhood. Me and my brothers would stage these fights.We were jumping off our roof and making little action movies at home, so that was the kid in me doing all the physical comedy stuff.

But, with Chelsea Handler, that scene with she and I was cut down so much because we really couldn’t get through the take. She was the funniest woman I have ever met and we would sort of sabotage each other and the crew would say, “All right. That’s really funny. I’m ready for break.”

I would be doing my close-ups and she would say, “You’re embarrassing yourself,” off camera. She would be messing with me. I have been doing this for 18 years and it was one of those times where we couldn’t get through takes because we were crying laughing. It’s one of those things that were funny at first and then the crew gets upset. 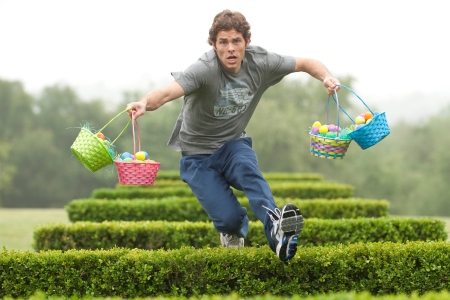 [When filming the scenes in which you interact with the animated rabbit], did they put in a stuffed animal for you in place of the rabbit?

James Marsden:  They will come out with a stuffed animal and block the choreography of where he’s going, so I get an idea of what I’m looking at and what he’s doing and then they will take him out and replace him with little pieces of green tape on little wires that stand up.

You just feel so crazy. By the end of the day, you never go home. Normally, if you’re acting with other people in a scene, you think, “Oh, that scene really worked today. I felt good about that.” You never feel that way with this. You go home and think, “I just was a crazy person all day talking to myself.”

There’s somebody else off camera who’s delivering the lines for you and I asked, “Is there a Russell Brand impersonator that we can hire?” Because I want to keep it as real as possible, but technically, it was tricky. 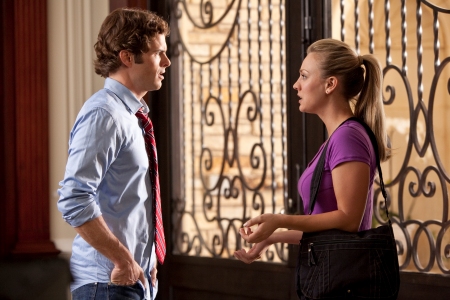 Have your two kids seen the movie yet?

James Marsden: They haven’t, no. They’re excited about it, though! I think this is the first movie they’re really excited about seeing.

Are you more interested in doing comedy? And do you have more fun with the comedy or do you like more serious roles?

James Marsden: I have been doing a lot more comedies in the last five years, and it feels that that’s a place where people are comfortable seeing me in.

But I like them both. One of the reasons I did Hop was because I had just wrapped a movie, Straw Dogs, which is a remake of a really intense controversial thriller horror movie that Sam Peckinpah directed in the ’70s with Dustin Hoffman.

After that, I had to shake all that off and this came along and I was similar to a fish seeing a shiny lure. “Oh, look at the bright colors! Oh, I’ll go do that movie. That sounds good.”

What were some of your favorite Easter traditions growing up or with your family now?

James Marsden: We did the normal traditions.We did Easter Eve, we never called it that, but the night before, we would dye eggs and paint them.We didn’t do anything outlandish or too different than most. We would wake up and the baskets and the candy would be there and we would have a hunt in the backyard, which always ended up in a fight, by the way. 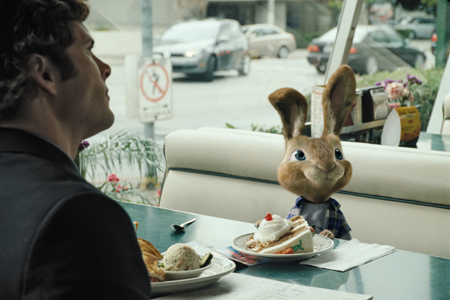 With the Easter baskets, do the kids get to eat all the candy at once, as much as they can in one day or is it rationed out?

James Marsden:  They’re actually pretty good at stopping when they start to feel sick.The Easter Bunny does a good job at mixing it up with candies that they may or may not like.

When I was a kid, I would do the Easter hunt and we had these plastic eggs that connect and have a dollar or five bucks in them. I have two brothers really close in age, so we would always end up fighting. One of us would say, “You got more eggs than me.” 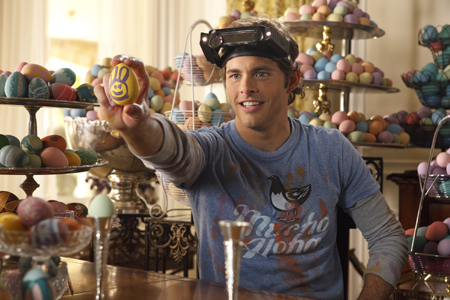 Since your kids are familiar with the Easter traditions, how are they about you actually playing an Easter Bunny?

James Marsden:  I don’t think they know, to be honest. I didn’t want to spoil anything for them. They know I’m in an Easter Bunny movie and they’re excited about it, but they don’t know much about the plot and they don’t really care, actually.

They’re proud of me but I’m “Dad” to them and it’s their reality. They act as if they thought every other kid at their school had a dad who was an actor, which kind of is the case.

How you deal with the magic of holidays. Is your 10 year old son mumbling things to your five year old daughter?

James Marsden: No, because my 10-year-old son is a believer. He hears things from kids at school, but my wife has been really good about that. My wife still believes. She’s said, “My father taught me that if you believe in it, it’s there.”

When she grew up, her family would play Christmas songs, and have hot chocolate and there would be a fade-in sound of hearing bells from the distance and a glowing red light in the middle of the forest. Santa really put on a show for her, so we do a lot of that. Our principal is if you believe it, we try and make it as magical of an experience as possible.

Santa makes the experience as magical as possible. We believe it. My wife believes, so the kids do.

My son came home and said, “People at school are telling me that there’s no such thing as Santa Claus.” And I said, “Oh, that’s too bad. Some people don’t believe in it.”

Get the Easter spirit with your kids by checking out Hop in theaters on April 1st, 2011.