Society and media expect perfection from moms: perky, bright-eyed, even-tempered icons. Not you? Welcome to the club. Motherhood is wonderful, yes, but it’s also messy and imperfect. Sometimes moms even get — gasp! — angry! Rather than trying to force yourself into that mold of (unrealistic) perfection and deny that you get angry sometimes, let it out. Acknowledge that you’re human and sometimes get angry. You might even become a better mother for it! 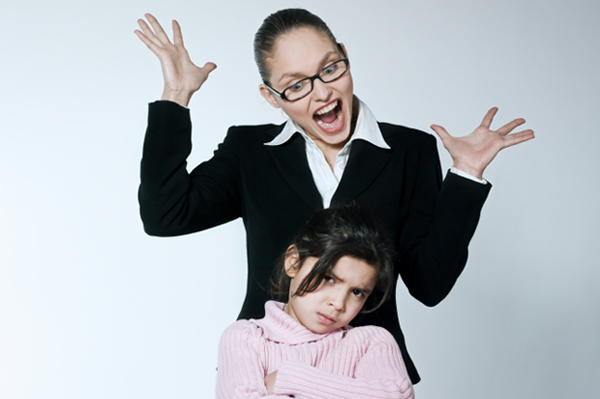 Anger is not a pretty emotion, but sometimes even pretty moms get angry. We get hurt, or we see people we love hurt, or injustices thrown about. We are emotional beings! Pretending we never get angry, though… well, it seems a bit hypocritical. How can we teach our kids to deal with their range of emotions when we deny some of ours?

Have you been denying your emotions, in all their delicious variety, because you think that’s the “right” way to be a mom? Stop it. You have a range of emotions — and so do your kids. You need to teach your children to deal with all their emotions…and you need to lead by example. If you get angry sometimes, accept it and learn to channel the emotions constructively. Wouldn’t that be a better example to your kids?

Keeping emotions bottled up is not healthy. Rather than holding it all in, get it out. Depending on the situation, it may be directly addressing the issue with someone whose actions trigger the emotion — or it may mean getting out to that kickboxing class.

Denying you are angry, pretending it doesn’t exist, that everything is fine, doesn’t solve the source issue. You need to deal with why you are angry, preferably in a constructive, problem-solving manner — before the pressure of the emotion builds up to eruption. One of the lessons to your kids of dealing with the full range of human emotions — including anger — is that there is a difference between the emotion itself and how you act on it. Show them that.

Once you have accepted, released and dealt with your anger, move on from it. If you really have dealt with it, this should be doable — but if you keep revisiting the issue and the emotion, there are likely more bits to work through.

Moving on from anger — essentially releasing a grudge — is not only key to your personal health, but it’s another of those lessons our kids need to learn. And they need to learn it from us. Moving on doesn’t mean forgetting. It might mean forgiving. It does mean releasing that anger fully and completely, learning from the experience and becoming more fully the person and parent we want to be.

It would be nice if we could experience anger and teach it our kids exactly once and never have to deal with it again. It doesn’t work like that, however. Anger — in moms, dads, kids, anyone — is an every day occurrence. You may need to accept — and release, deal and move on from anger — repeatedly before you get the process down and your kids get the message.

Being angry sometimes doesn’t make you a bad mom. It makes you human. You might not fit into that societal ideal — but it wasn’t realistic to begin with. Learn to deal with all your emotions — for your sake and your kid’s sake.

More on dealing with anger

2 hrs ago
by Michelle Maffei