When security guards at a Washington, D.C. museum told a nursing mom she needed to move to the bathroom, she confided in her mom friends… and that led to a mobilizing of other nursing moms who want to remind the world that nursing is not only natural, but allowed in public by law. 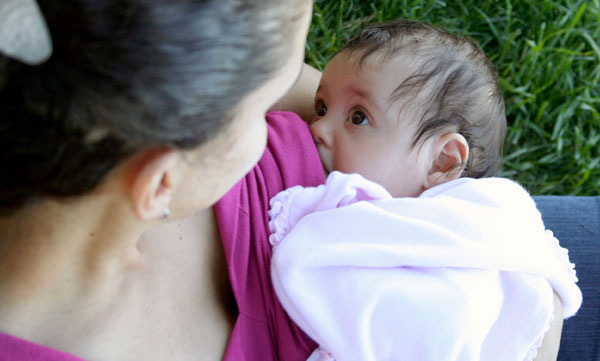 Nursing mothers are planning to descend on Washington , D.C.’s Hirshhorn Museum this Saturday, to stage a so-called “nurse-in.” The purpose? Raising awareness about a woman’s right to breastfeed on federal property. The peaceful demonstration comes on the heels of a January 30 incident at the museum when nursing mother Noriko Aita was ordered by security guards to nurse in a bathroom — one suggesting that she sit on the toilet while doing it.

“I was shocked,” Aita told The Washington Post. “What’s wrong with nursing? But I wasn’t sure of my rights and the law, so I told my husband: ‘Let’s just go home.’ ”

When she returned home, she learned via the internet that the guards had violated her rights granted in the Right to Breastfeed Act, passed in 1999.

The museum has since apologized to the mother, a move that was applauded by many. But the nurse-in will go on as an awareness-raising measure.

The nurse-in will take place at the Hirshhorn Museum in Washinton, D.C. on Saturday, February 12. It’s planned to go from 10 a.m. until 12 p.m. and is being organized by LJ Pelham.

Breastfeeding is a big issue that pits mom against mom, mom against businesses and more. But nursing moms say that needs to change. “People against breastfeeding should instead be supportive that these moms are doing everything to help their baby. Breastfeeding isn’t easy, it may be natural, but it’s difficult at times,” says Amy Barr of Florida.

Elysse Fleece of Colorado Springs wishes she could be there for the nurse-in with her nursing 3-year-old son. “It just infuriates me that people feel they have the right to judge a mother who is doing the most natural healthy thing she can for her child(ren). … Breasts are made to feed and as a society we should support woman in their decision to breastfeed for any length of time,” says Fleece.

Fleece isn’t alone in her belief. Tara Haelle of Austin, Texas, says that she has no patience for anyone who tries to infringe on her right to breastfeed her son in public. “I am discreet, but I don’t hide or skulk off into my car,” says Haelle.

But Haelle has experienced what it feels like to have someone object. “A friend once objected to the fact that I breastfeed in public, claiming that its not culturally acceptable in our country. I countered that I’m doing my part to change that. I said if he or anyone else is incapable of seeing the breast as anything other than a sexual object and cannot accept its being used for natures intended purpose, that’s his problem, not mine or my child’s,” she says.