As parents, we want to see our kids thrive — socially, academically and personally. However, sometimes life throws up roadblocks. These roadblocks can take many forms, including childhood anxiety. 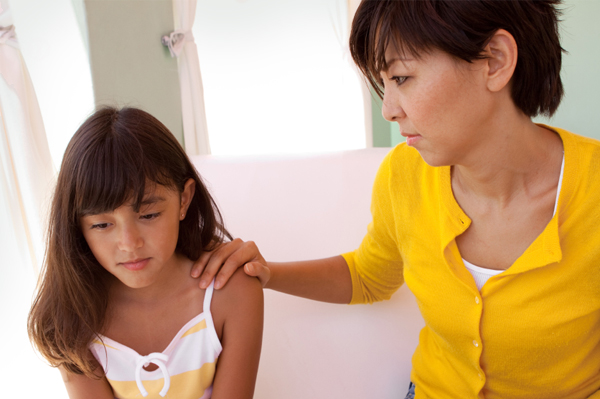 Growing up can be tough and every child handles the experience differently. Some will be greatly impacted by feelings of anxiousness or excessive worry. Dr. Jennifer Connor-Smith, an expert in childhood anxiety and depression, shares her insight on the topic.

We’ve all been anxious at one time or another, but anxiety disorder can prevent your child from enjoying simple, everyday experiences that would not typically cause concern. According to Connor-Smith, “Anxiety disorders can take many forms, ranging from a fear of a very specific object or situation to a pattern of excessive worry about almost all activities and events.” Connor-Smith describes the most common anxiety disorders in children:

Anxiety in adolescents is very similar to anxiety in adults, but in younger children, anxiety typically involves clinging, crying, tantrums and passionate avoidance of a feared situation. “Preschool and school aged children often complain of stomachaches or headaches, attempt to avoid the things they fear, and repeatedly seek parental reassurance or support,” says Connor-Smith. “Often, they are not able to directly express their anxiety or identify a reason for it, and will offer only vague comments that they ‘just don’t want to go’ to a certain place or ‘just don’t like’ certain activities.”

As parents, we often want to reason with our kids or protect them when they are fearful of a specific activity or experience. But if your child is suffering from anxiety, this course of action could be futile. “Before children are old enough to reason logically, it is rarely helpful to try to talk them out of a fear by presenting facts,” says Connor-Smith. “Rather than attempting to convince a child that there is no such thing as monsters, it is more effective to work with their magical thinking to invent an anti-monster spray (e.g, water, a drop of food coloring, a drop of perfume, and glitter) and spray the room before bed each night.”

Whether to treat a child’s anxiety — which doesn’t necessarily mean medicate — is a tough parental decision, but there are good reasons to consider doing so. “Left untreated, serious anxiety tends to become even more powerful over time,” says Connor-Smith. “A typical approach to therapy involves teaching children skills for regulating emotions, reducing the physical arousal involved in the fight-or-flight response, thinking logically about the true level of threat, and solving problems more effectively.” Ultimately, the decision is yours so talk to your doctor or family therapist if you are concerned.

More about anxiety and kids