Television has been linked to everything from childhood obesity and violence to over-sexualized children and low performance in school. But is television really the culprit of all the problems in our society or is something more at play? 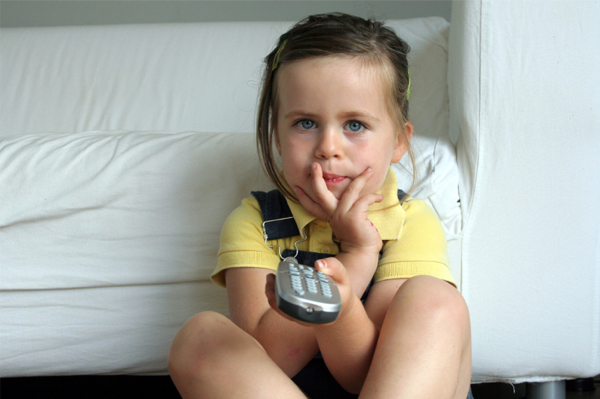 The Root of Societal Evil

It is easy to blame television and other forms of media for the degradation we see in our society. From violent cartoons and shows about teen sex to the glorification of junk food in commercials, children can certainly get the wrong messages from watching TV.

Even “educational” shows are no longer recommended by the American Academy of Pediatrics for any child below the age of two. Certainly the AAP has a point when it says, “Any positive effect of television on infants and toddlers is still open to question, but the benefits of parent-child interactions are proven. Under age two, talking, singing, reading, listening to music or playing are far more important to a child’s development than any TV show.”

As parents, we must be aware of the amount of exposure our children are getting to television and other forms of media at a young age. Children need to interact and form relationships with real people in order to grow and build a healthy sense of self. Leaving children to entertain themselves for hours in front of the TV is bad not just because of what they are exposed to, but because of what they are not exposed to. While they sit listlessly in front of the TV, they could be playing games, having conversations, singing songs, doing puzzles, making art and building relationships.

A Mirror of Our World

But the real question is whether TV and other forms of media are to blame for social ills or if TV is just a reflection of the world we have already created ourselves? In every generation, parents are concerned that their children are being exposed to something more radical, more dangerous than the generation before.

In reality, our society is not necessarily more depraved than cultures of the past — it’s just different. We may have violent video games, but no less than 100 years ago, public executions were common all around the world.

“Parents should know that the rate of violent crime among juveniles has plummeted in the last 10 to 12 years,” says Dr. Karen Sternheimer, Ph.D., sociologist at the University of Southern California and author of Kids These Days: Facts and Fictions About Today’s Youth.

Studies also show that the teen pregnancy rates are at their lowest level in 30 years. “One thing that people often don’t realize is that in the years since video game sales have really exploded, not only have youth violence rates decreased but violence rates in the U.S. have declined precipitously,” Dr. Sternheimer continues.

Of course, this does not mean that children are not influenced negatively by TV, but rather that television may not be the root cause of our social problems. More important than how much TV children are exposed to is the quality of their family life. Children need involved parents who show interest in what their kids are doing, thinking and feeling. “There’s very little that going to interfere with a parent who’s really plugged into their children’s lives,” explains Dr. Sternheimer. “Playing a video game or seeing a single movie won’t override that.”

We live in a media culture. Our children are growing up in a society that moves and breathes digitally. Unless you live in an unplugged commune in an extremely remote location, it is unlikely that your family life is unaffected by some form of media. From handheld video games and iPods to SmartPhones and iPads, technology is everywhere and it is unrealistic to imagine that we can completely shield our children from it.

On the other hand, we do have the capacity to control the amount and kind of media our children are exposed to. Because of the many ways that children can now interact with the digital world, we need to be aware of how many forms of media we allow in our homes and furthermore, how much time they are allowed to spend on them. Many experts these days recommend that you monitor not just your children’s TV time, but their overall “screen time,” which might include time playing the Wii, surfing the web or playing on their Gameboy.

Here are some tips to help your family manage its media time:

Don’t keep television sets or gaming consoles in your bedrooms.

Have one or two central locations in your home where the family gathers together to watch TV or play games. This way, television watching and gaming become a social interaction and not a lonely form of escapism.

Don’t use television as a reward.

This gives TV extra power. Allot your children a certain amount of screen time each day and make rules about how they can use it — such as after homework and chores are finished.

Choose age appropriate shows and video games for your children.

In the case of young children, make sure to preview all shows and/or games for suitable content.

Serve fresh fruits and veggies or do something else with your hands instead like a fun family craft.

Use the television as a launching pad for family discussion.

Choose shows that have educational or moral value that you can talk about with your kids. If something happens on a show that is questionable, ask your children what they thought and have a lively conversation.

Choose to go a week (or more!) without any TV. Play board games, do puzzles, make crafts, try a science experiment, put on a play. Your children might even be surprised at how much fun life can be without the infamous Boob Tube.

More on television and kids