A civic-minded nine-year-old attends a political event in her community. Inexplicably, she, among others, is shot and killed. How do we wrap our minds around senseless tragedy of this magnitude? And how can we possibly explain it to our children? 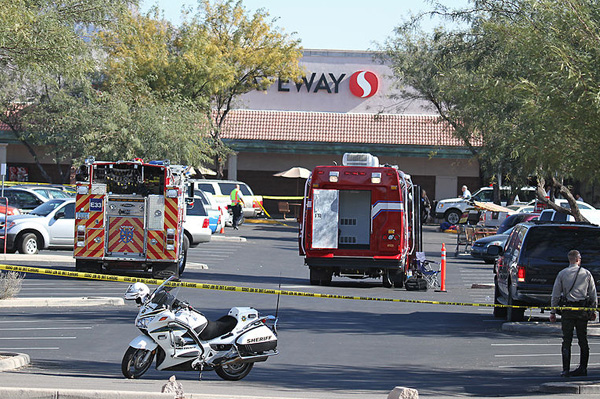 Not an ordinary day

Days that change our perspective tend to start out like most other days. The sun rises in the east. Perhaps the alarm clock goes off, the coffee is put on, breakfast is made. But then something is different, something changes things.

Saturday, January 8th was like that. It was a normal Saturday. Our family arose — leisurely — and started about our day. After my regular Saturday workout, I turned on the computer to record my exercise — and I started to see the news alerts. There’s been a shooting in Tucson, the alerts read. Then they noted the shooting was on the north side of Tucson. Then I called my brother. He lives in Tucson, on the north side.

After verifying my family was okay, I started to take in more on what was coming up on the news sites. Over the course of the next few hours I was mesmerized. There were people dead, people fighting for their lives. A politician, a judge, a child, a grandmother, a husband, a wife, others. Humans.

For my family, there was immediacy to the situation that our neighbors weren’t feeling. Although I live on the east coast now, I was born and raised in Arizona, and my father was a career politician there. Politics, whether I like it or not, is in my blood. My family still lives in Arizona, so our first concern was the safety and well being of my brother and his wife and kids, of course, and we were hugely relieved that they are okay. Then our thoughts turned to the victims. That the intended target was a politician interacting with her constituents was a weight on my chest. I thought of the times my father had felt threatened by the public, and some basic safety themes he’d bring up at the dinner table occasionally– and the couple times law enforcement stopped by. My dad called them “courtesy” visits so as not to alarm us.

How do we talk about this?

As I watched the live reports, checked the web, and generally fretted and gasped with each new detail, my kids were around and about. They asked what was happening, and I answered as best I could. But as the events continued to unfold, I wondered, “What do I tell my kids about this? How do we talk about it? What is this all about? How to I explain and reassure them? What do I do?” I felt a bit in shock by the events — stunned and unsure of what was happening.

Days later, there’s still much speculation about the shooting and the motive. The tragedy dominates the news. Why? How? In many ways it’s so utterly senseless, yet here we are as a nation, trying to make sense from nothing and asking lots of questions. The news stations, the politicians, and the pundits have plenty to talk about. Finger muscles must be getting tired from all the pointing they are doing. And still I am left with the question, what do I tell my kids? What do we talk about? Is there any order to be had from this extreme disorder?

We may never be able to wrap up this series of events with a neat bow; there is no logic to it! But I think it’s fairly natural to try to somehow figure it out, manage it, make order from the chaos. As I think and read and gasp again — and hug my kids to the point of their annoyance — many thoughts are tumbling around in my head. Turns out it’s not one simple issue for me, it’s a bunch of issues. The discussion of those issues, however, no matter how discussed and hashed out, will never make up for the lives and potential lost in that grocery store parking lot. But they are still issues I feel I need to raise with my family.

8 hrs ago
by Amelia Edelman