Would you breastfeed another woman’s baby? Would you allow another woman to breastfeed your baby? While these questions may be hypothetical for you, they weren’t for two women who met one day, formed a bond and shared something very personal. 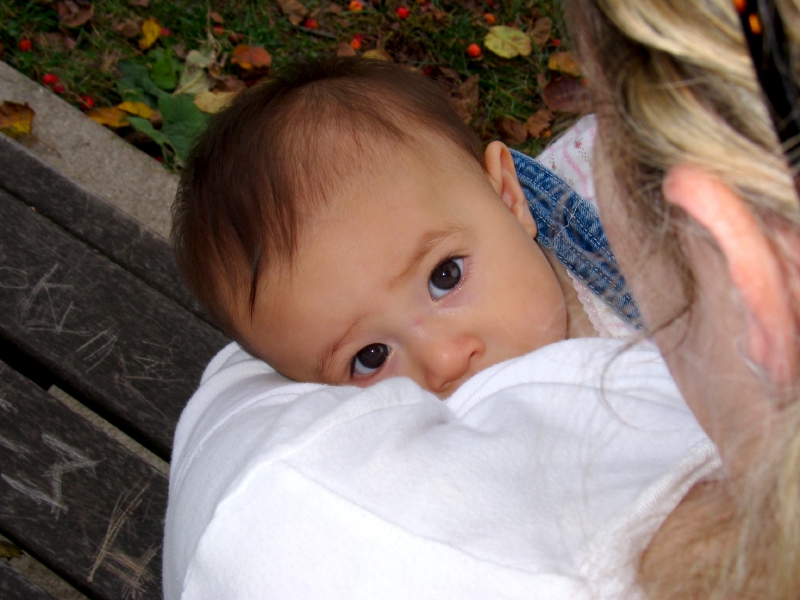 It was a year and a half ago that Catherine Connors of Her Bad Mother breastfed another woman’s baby. The two women met at a conference. Connors was there without her baby and had forgotten her breast pump. She was in pain. Laura, another woman at the conference, was a breastfeeding mom whose baby was with her. Laura and Connors spent the morning together, talking and getting to know one another. And because Connors was in pain from being unable to nurse or pump, Laura suggested Connors breastfeed Laura’s baby. The issue was recently revisited by Connors and a few other panelists for a Momversation video.

In her blog post titled They Shoot Wet Nurses, Don’t They?, Connors wrote the following: “I was grateful — so, so grateful — for Laura and her child; their generosity and open-mindedness and open-heartedness saved me a great deal of pain. At the end of the day, a mother was released from some considerable discomfort, and a child was nourished. Wonderful, no?”

What Laura and Connors saw as a solution to an uncomfortable problem, another woman saw as unacceptable. The unidentified woman returned home and wrote a blog post about it — one that drew agreement from many people and that, according to Connors, included attacks, particularly in the comments left by other readers. As a result, Connors wrote They Shoot Wet Nurses, Don’t They?, where she explained what happened – – why she breastfed another woman’s baby, the relationship she and the other woman, Laura, had developed and why she didn’t think it was worthy of the criticism received. (The original blog post criticizing Connors was removed after Connors responded on her own blog.)

Is breastfeeding another woman’s baby unheard of in “modern times?”

Not long before Connors breastfed Laura’s baby, Salma Hayek was in Sierra Leone, where she breastfed a local baby on camera. While the reactions were mixed, she received a lot of praise.

I don’t have an answer. It seems that many women who commented put themselves in the situation when deciding whether what Connors did is “okay” with them. So, would you breastfeed another woman’s baby? Moreover, would you allow another woman to breastfeed your baby?

It’s an interesting question and one that many of the commenters provided an answer to on Connors’ post. Perhaps most compelling was the fact that while many women said they would breastfeed another woman’s baby, they probably wouldn’t allow another woman to breastfeed their baby.

Some people were concerned about the health risks of breastfeeding another woman’s baby — whether any diseases could be passed from a woman to a child. The Centers for Disease Control notes that a woman should not breastfeed under the following circumstances:

The CDC further notes that it is unnecessary to use special precautions when handling breast milk: “The Universal Precautions to prevent transmission of human immunodeficiency virus (HIV), Hepatitis B virus, and other bloodborne pathogens do not apply to human milk.” Note that taking Universal Precautions and ingesting breast milk are not the same. However, the CDC discusses diseases that are transmittable through breast milk and the list doesn’t appear to be long.

Connors noted that she and Laura had a conversation about health — “Laura trusted me when I said that I was healthy and not taking anything that might compromise my milk. Perhaps this had everything to do with my appearance, or with the fact that I was obviously a nursing mother, or perhaps just with the fact that she had decided that I was simply worth trusting.” Whether you would take another woman’s word for it, Connors and Laura felt comfortable with each other, and that was enough for them.

Connors herself best summed it all up when she said, “You’re welcome to say that you couldn’t see yourself doing this; you are welcome, even, to cringe and shudder a bit in distaste. Whatever. We all have our issues. Just don’t flaunt your disgust. And certainly don’t use it to publicly shame mothers who make choices that you might not make.” She encouraged women with differing opinions to share them, but asked that they remain respectful.

Most of us probably have an opinion on this issue. We moms have opinions on many parenting topics, from co-sleeping to breastfeeding in general to vaccinating. However, we should be able to have our opinions and express them in a way that isn’t ugly. Simply because I don’t believe I would have breastfed another woman’s baby or allowed another woman to breastfeed my baby if I was in the situation does not mean I would think to — or want to — attack Connors or Laura.

>>So, what do you think about this? Watch Connors’ brief video on Momversation. What would you do? Would you breastfeed another woman’s baby? Would you allow another woman to breastfeed your baby? Vote in the poll and share your opinion in the comments section below.

22 hrs ago
by Sarah Cottrell