There’s no better treatment for pain than a natural remedy — and you don’t even have to go to the drugstore for this one: The love hormone. Discover how the science of love and the benefits of kissing influence your well-being. 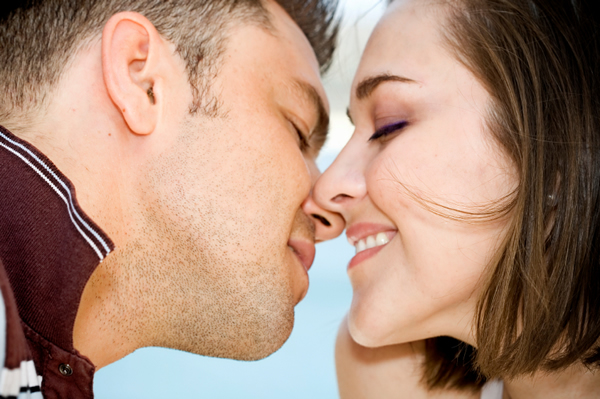 A new study that appeared in the online journal PLoS One found that the “head over heels” feeling of love activates love hormones akin to the benefits of a pain reliever (and even illicit drugs). Here’s why you should get to kissing, stat!

The scoop on love hormones

When we’re in love, our bodies know something is up – but what prompts that “feeling”? What causes such a visceral reaction? Simply enough, hormones — most notably, dopamine, endorphins and oxytocin.

Dopamine increases with love, says Kent Holtorf, M.D., a leading hormone specialist and founder of Holtorf Medical Group. “This is the hormone that is stimulated when cocaine is used, producing euphoria. Dopamine production is the main source of addiction with such drugs, and may explain the poor decisions that can be associated with love.” It’s also important to know that dopamine diminishes with long-term relationships, which could explain why that initial love or lust typically fades away.

Natural endorphins increase with love and contribute to the euphoria as well. And oxytocin produces the feelings of trust, empathy and closeness felt when you’re in love, explains Holtorf. It also increases sexual arousal.

Why love is a pain reliever

The oxytocin that’s produced when we’re in love plays an important role in pain modulation. “It’s shown to stimulate the body’s natural pain-suppressing pathways in multiple parts of the brain and has direct action on the body’s natural pain receptors,” Holtorf says. Endorphins have analgesic properties, making a person more tolerant to pain.

This doesn’t quite explain, however, the colloquial saying, “I love him so much it hurts!”

Besides the oral health benefits of kissing (the increased saliva in your mouth cleans your teeth of cavity-causing bacteria, according to the Academy of General Dentistry), there are mental and emotional perks to puckering up. Holtorf names the following kissing health benefits:

Even though the busy lives of parents, employees and adults (or whatever umpteen hats you wear) don’t always leave much time for romance, at least make an effort to get a few smackaroos in with your sweetie at the day’s beginning and end. Love – it does a body good.

These Are the Secret Meanings Behind Every Kardashian-Jenner Baby Name