Bristol Palin and The Situation teamed up for a pro-absintence ad for The Candies Foundation. Yes, it’s as cringeworthy as you think it is. 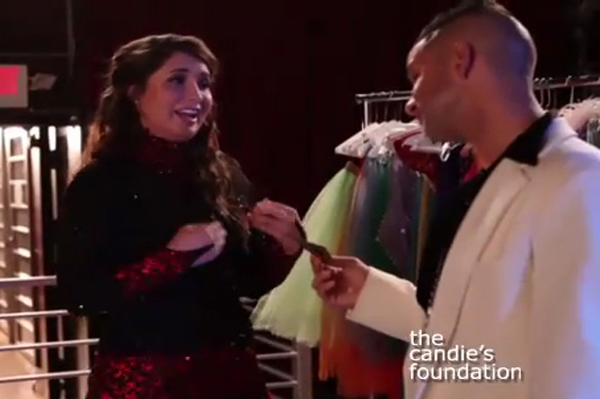 It seems like Bristol Palin and The Situation have more in common than a stint on this season of Dancing with the Stars. The pair is now starring together in an abstinence public service announcement for the Candies Foundation.

This isn’t the first time that Palin has appeared in a teen abstinence ad. The dancing queen and teen mom first appeared in a Candies-sponsored PSA earlier this year. She publicly stated that she’s abstaining from sex after giving birth to son Tripp with ex-fiancé Levi Johnston.

The Candies Foundation made a terrible mistake if they thought casting Mike “The Situation” Sorrentino in the ad as a safe sex advocate would work — especially since his life on The Jersey Shore is all about random hook-ups and casual sex.

The PSA shows Palin and The Sitch backstage, presumably at Dancing with the Stars. The ad shows an awkward Palin promoting safe sex with an equally over-confident Sorrentino promoting Magnum condoms (as if.)

“I know you’re all about that abstinence thing, but come on, B-Palin, are you serious?” he asks. “You’re not gonna hook up before you’re married? For real?”

“For real,” she replies

The ad might make Palin look silly — but she’s to commended for the message, we suppose. And hey, it might make more teens sit up and take notice, especially since she’s likely going to with DTWS.

Watch Bristol Palin and The Situation

Is Your State Trying to Ban Transgender Kids From Sports? Here’s Why That’s So Wrong