You thought you dealt with the lying issue when your child was younger. You thought it was clear: you and your teenager had enough of a bond of respect and honesty that he wouldn’t lie to you. But then your teenager did lie to you. In addition to dealing with the lie, you are dealing with bigger emotions — some hormonally fueled — and judgment on all sides. What the heck happened?

Related story How to protect kids from cyberbullying 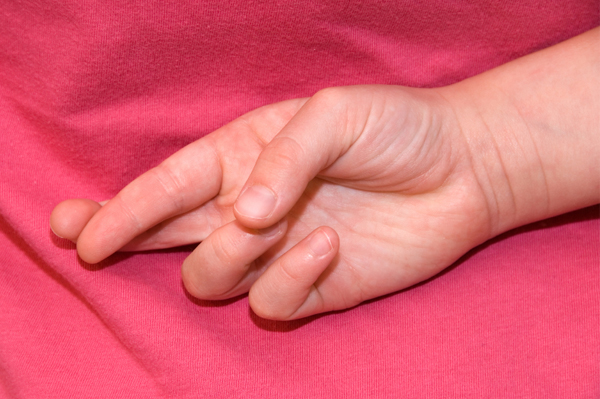 A wise man once told me, “Every teenager is a liar.” I dismissed his words, declaring it a rash, overreaching generalization, despite my respect for him and that he had raised four kind, hard-working and respectful sons to adulthood and had some experience from which to speak. Not my son, I thought, not my sweet, honest, 13-year-old.

Just two days later, I caught that sweet, honest teenager in a whopper of a lie. Oh boy. Time to get realistic about my teen.

How you choose to address your individual child’s lying is up to you and will vary by child, family and lie — but it is often a separate issue from understanding why and how lying may increase during adolescence.

The teenage years — as you hopefully remember from your own adolescence — are an uncertain transitional time. Your child is not quite a child anymore, nor is he or she an adult. Some days your teen may exhibit adult-like behaviors and responsibility and other days may have toddler-like tantrums. Throw in some hormones and changing bodies and social dynamics and you have some tricky and confusing situations for the whole family. In trying to fit in and figure out this new body, there are many opportunities and (perceived) reasons for a child to lie.

There are ways in which your child may need more structure at this time in his life, and it’s up to you to put it in place. You may be able to give your child more freedoms within that structure — for example, time with friends at the mall or at the high school football game — the structure of when to be home and how we speak to each other and the values of respect and honesty within the family are as important as ever. Keeping lines of communication open reduces the opportunities and reasons for lies, though it may never eliminate them.

Your child may resist this effort (naturally, as you likely did, too!), and declare that you don’t “trust” him. Well, you don’t, really, on some issues, and you probably shouldn’t. The adage, “Trust, but verify,” should be a mantra and a guideline as you navigate the trickier roads of adolescence.

As a parent, you will have to find new ways to stay alert to your teenager’s moods and patterns, and they will be in direct response to your child’s quirks. You will learn, for example, if your child is too calm telling you about a homework issue, it might be something to look into further. Some kids are very adept liars and will look straight in your eyes and tell an untruth; keeping on top of the situation will require some creativity!

There is no one correct path for navigating adolescence, and that includes the lying that often increases during this time. But with understanding, structure and creative attentiveness you can help guide your teenager through this very confusing time. Lies and all.