As a new mom, you were likely very hands on. When your baby cried, you responded. When she was hungry, you fed her. When she needed changing, you grabbed a fresh diaper and took care of business. However, as your baby grows into a toddler, preschooler and beyond, how do you transition from doing everything for her to doing just the right amount, without becoming too hands off?! Keep reading for advice on how to find the balance between being too hands on and too hands off. 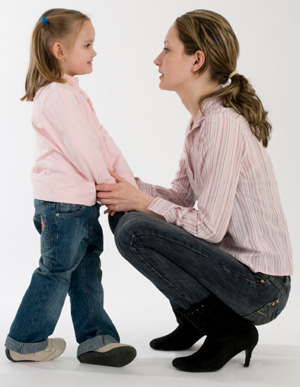 Nobody wants to be that mom at the playground — the one who hovers over her child, guiding his every move — a helicoper parent. Raising a child to feel too dependent on you won’t benefit him at all. At the same time, you don’t want to remain so uninvolved that your child feels like he is on his own. Finding the middle ground between being too hands on and too hands off as a parent might seem difficult, but it’s not impossible. Be mindful and make the effort early so that your child can grow up with confidence.

When your child was a baby, you did everything for her because she couldn’t take care of herself, plain and simple. David Elkind, Ph.D., author of The Hurried Child, explains, “As a general rule, the younger the child, the more the parent has to do.”

For example, if your toddler is able to feed himself without throwing the majority of his food on the floor, then allow and encourage him to eat on his own. Seems simple, right? But the point is that as a parent, you give your child responsibilities and freedoms in accordance with his abilities. As he gets older, his abilities will expand, and so should his self-guided actions.

“If you build in controls when your children are young, they’ll be able to use self-control as they get older,” says Dr. Elkind. The goal is to instill responsibility and accountability in your children so that as they grown, they become self-reliant and make good decisions. That’s not to say that you tell your children what to do, step back and then hope they do it. Rather, you teach your child and lead by example, then give him the opportunity to act on his own — within age-appropriate boundaries — and remain present.

As children get older, Dr. Elkin says you should give them more freedom to make decisions on their own. Dr. Elkind isn’t suggesting that walk away and allow your child to do whatever he wants simply because he can. Sure, your teen can drive, but you don’t hand over the keys and allow her to drive wherever she wants, whenever she wants, with no boundaries. You still have to parent and be the one to say, “‘This is the way things are done in this house.’ It’s easier to let kids do their own thing, but parents need to be involved,” explains Dr. Elkind. You tell her where she is allowed to drive, who can be in the car with her and when she must return home.

You set the rules — the amount of television time for your elementary student or curfew for your high school student — and you enforce them. However, you also give your children opportunities to make good decision for themselves.

Without some introspection, the mom on the playground who hovers over her five year old can easily turn into the mom who acts as her high school student’s social director and activities coordinator. And the mom who sits back and lets her five year run amok on the playground can become the mom whose teenager blows off curfew and skips class, both with no consequences. Being a good mom is important to us and we try to do the best we can. We’re going to make mistakes, but with effort and the recognition that allowing our children to make age-appropriate decisions on their own, we can become balanced moms.

How do you feel about hands on and hands off parenting? What kind of mom do you think you are? Share your thoughts in the comments section below.

Read more about how to be a better parent

24 hrs ago
by Cindy McCain