To Write Love on Her Arms is a movement with the mission to provide hope for young people suffering from depression. Read on to learn more about this important cause. 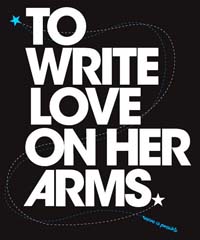 Depression is a serious problem — the National Institute of Mental Health says that one in four adults suffer from some sort of mental illness, and many of those suffer from depression.

TWOLHA is “a non-profit movement dedicated to presenting hope and finding help for people struggling with depression, addiction, self-injury and suicide. TWLOHA exists to encourage, inform, inspire and also to invest directly into treatment and recovery.”

TWOLHA aims to help bridge the gap between young people and treatment by using a variety of targeted media – including music festivals, social media and schools/universities. The movement gained notoriety after mentions by a number of high-profile musicians, like OneRepublic, Evanescence, Switchfoot and Amberlin.

The motto of To Write Love on Her Arms is “Hope is Real. Help is Real. Your story is important.” They encourage people to literally write Love on their arms to show solidarity with others fighting depression and mental illness.

“A friend of mine told me there is no such thing as suicide prevention. This is an attempt to prove him wrong, to say that love can change a life. We can hold back the darkness. Rescue is possible,” Tworkowski told CNN.

It’s obviously working. We hope it the movement grows even larger so fewer young people will feel so alone in their fight against depression.

7 hrs ago
by Jennifer Audrie