Amazon caved to public pressure Thursday and pulled a self-published book that promotes pedophilia. We won the battle, but did we win the war? 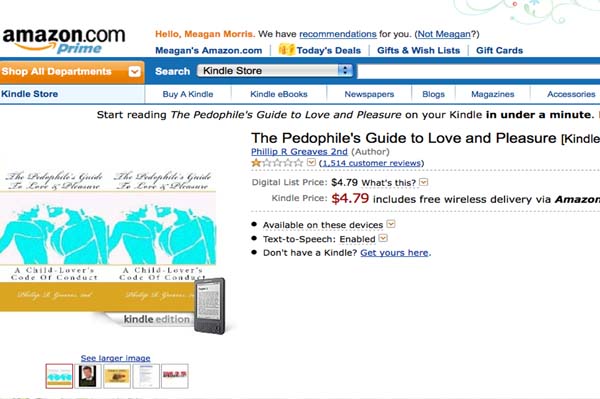 Amazon silently responded to thousands of complaints Thursday by pulling a pro-pedophilia eBook from their virtual shelves.

As we reported yesterday, a Mommyblogger tweeted her outrage over Amazon’s approval of The Pedophile’s Guide to Love and Pleasure: A Child-Lover’s Code of Conduct. Thousands of others followed her lead and threatened to boycott the retailer over their refusal to pull the book.

Now, it seems they’ve caved to the pressure and removed the page. However, the damage is already done. The page’s sales ranking shot up 101,000 percent after all the publicity and even broke Amazon’s Top 100 Kindle Books listing. That means the book has sold many more than the one copy he claimed in a Wednesday interview.

Who’s buying the disgusting book? It’s likely that many people are perversely curious about the purportedly-graphic contents of the book. That’s fine — we wouldn’t be caught dead with something so disgusting on our computers, even for research.

It’s also likely that some legitimate pedophiles got a hold of the creepy how-to manual as well. Now, we’re not saying that there will be some uptick in child molestation because of the book. However, giving a book like this to someone with those tendencies is like giving a drug addict a sample of cocaine — it’s just not a good idea. At all.

And guess what else? There are still pro-pedophilia books on Amazon. Understanding Loved Boys and Boylovers — a book that previous ignited public furor at Amazon — is still for sale on the site.

So, while bloggers won the Amazon battle, there’s still a war out there. And it’s a war that’s bigger than all of us, and we’re not sure it can be won.

What do you think? Weigh in below with your thoughts on this serious subject.