Big name designers are coming out with more and more collections targeting kids — complete with big-ticket prices. Though the designer clothes for kids are undoubtedly adorable, is paying hundreds for a sweater your daughter will soon outgrow — or splatter with mud! — really a good idea?

Related story It's Official: These Are The 8 Most Comfortable (& Most Adorable) Sandals at Nordstrom 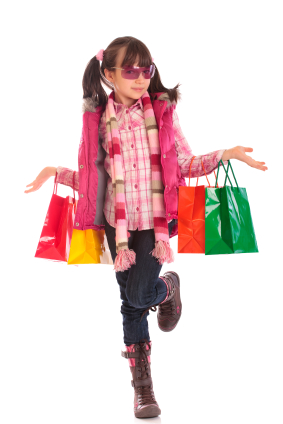 Couture for kids is a hot market these days, with those that can afford it grabbing up kiddie sweaters for hundreds of dollars and drooling over high-priced tees for little ones.

It used to be that big-name designers targeted the wealthy adults who could afford the big price tags. But these days, those designers are penning fashions for a smaller crowd — children. From Gucci to Fendi, big name designers are releasing couture collections for kids — complete with the designer-style prices.

But it’s not just Suri Cruise rocking designer clothes for kids … other children not born to celebrities are wearing the high-priced kids’ couture.

If the designers are making these clothes, surely someone must be buying, right? They are. “It makes sense that designers are chasing after the one group that is still spending. Nearly half of affluent Americans (44%) bought luxury items in the second quarter of 2010, up slightly from 42% in the first quarter, according to Unity Marketing,” says Larissa Faw, editor of Youth Markets Alert/Marketing to Women for EPM Communications.

Elizabeth Berger, MD, a child psychiatrist and author of the parenting book Raising Kids with Character says that these designer duds for kids are a status symbol for parents who can afford it. “People with a lot of extra dollars often spend money on high-priced items that are themselves beautiful but that also send the message, ‘I am rich.’ Very high-priced clothing is often lovely and unique. But it also has a symbolic value as an advertisement, ‘I am special. I am wealthy,'” says Berger.

The message to kids

Though they are undoubtedly adorable, is paying hundreds for a sweater your daughter will soon outgrow — or splatter with mud! — really a good idea? What message does it convey to children when parents are dressing them in clothing that costs big bucks?

“When it comes to preschool apparel, these children are basically reflections of their parents, and sadly, derivative of the Real Housewives culture, in which these women compete with one another on materialistic items,” says Faw. “These parents use their child’s clothing and accessories as a way to convey their own status. The preschooler doesn’t care if she is wearing Karl Lagerfeld, but her mom’s friend definitely notices.”

The fact that those who can afford these designer duds are buying underscores the growing gap between rich and poor, says Berger. “The astronomical prices of children’s clothes are no more absurd — or no less absurd — than the astronomical prices for adult’s clothing or automobiles or houses,” Berger says. “We live in a society in which there is a great gap between rich and poor — and endless focus through media which is available to everyone on the gap itself, and on who has what.”

As for the impact on kids, it’s probably not too much, says Berger. Ultimately, to a child, clothes are clothes. But as they grow, they will learn about status symbols. “Children will learn from their peers and from media all around them that certain symbols convey wealth and power,” says Berger.

Why the designers are doing it

Simply put, children’s clothing is an untapped market for designers with tremendous opportunity. “As for designers, this is the holy grail for them. Many have tapped out all of the channels for their core customer (purses, handbags, shoes) and need a new category,” says Faw. “Plus, these moms — and it’s definitely women — aren’t going to flinch at a triple-digit price tag because they want the best for their child, and what it says about her.”

And, of course, if you want your kids to dress in designer duds, it’s possible to do it on a budget. Really.