Gone are the days of describing parents as merely “strict” or “lenient.” Parenting styles now come with titles and definitions. Get the scoop on five of the most talked-about ways of parenting. What kind of parent are you? 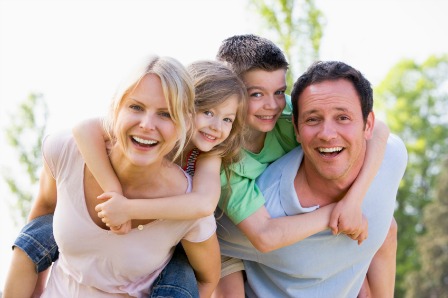 The rules for parenting are known to shift generation by generation.

“Not having a strong sense of who you are and how you want to parent can make you a little crazy,” says Tracey Frost, CEO of Citibabes, an educational family membership club in New York City. “Be as educated as you can and then make your own decisions [about your parenting style].”

Following are five of the most common parenting styles that today’s moms and dads are applying to their families.

This might be called the “old school” method of parenting, “intuition” or simply a feeling of “go with your gut.” Frost describes instinctive parenting as “very much your own personal style of parenting, usually influenced by your own upbringing.” In other words, as an instinctive parent you’re more likely to teach what you know and parent the way you were parented, whether you were brought up by your mother and father, siblings or another caregiver.

In attachment parenting, the goal is for parent and child to form a strong emotional bond. The people who adopt this parenting style strive to promptly respond to their child’s needs and be sensitive and emotionally available for their child at all times. The belief is that strong attachment to the parent helps the child become a more secure, empathic, peaceful human being. Fans of attachment parenting often believe in natural childbirth, a family bed, avoidance of corporal punishment, homeschooling and may be part of the anti-vaccination movement.

“Helicopter parents constantly interact with and often interfere with their children’s lives. They hover like a helicopter,” explains Frost. While helicopter parenting is fairly normal to ensure the safety and security of babies and very young children, be forewarned — smothering your child in every aspect of their life can ultimately backfire. “Too much of this style of parenting and children can become dependent on their parents’ money, time and advice past their college years and into their professional careers,” says Frost.

“You live under my roof, you follow my rules!” It’s a cliché, but one that parents may often find themselves speaking — and it probably most closely mimics the authoritative parenting style. The parents who fit into this category typically establish rules and guidelines and expect their children to follow them, but the methodology is a bit more democratic than “what I say goes.” For children who fail to meet the authoritative parent’s expectations, the parent is more nurturing, forgiving and responsive. Their idea of discipline is to be assertive but not restrictive, to support rather than punish.

It’s a child’s world for permissive parents, sometimes referred to as nontraditional, indulgent parents. “They have very few demands to make of their children and rarely discipline them because they have relatively low expectations of maturity and self-control,” says Frost.

If at any point the word “lenient” comes back into play, it’s for this type of parent. The permissive parenting style is often evidenced by individuals who try to be more friend than parent, avoid confrontation and are generally nurturing and communicative.

Are we empowering our kids too much?
Peaceful parenting
Can your parenting style destroy your marriage?