Has your preteen daughter started nagging you about wearing makeup yet? If she hasn’t, rest assured, she probably will. Preteen girls seem to be sporting makeup — or wanting to — at a fairly young age. If you want to know why and, more importantly, what you can do to slow your daughter down and keep the makeup at bay, read on. 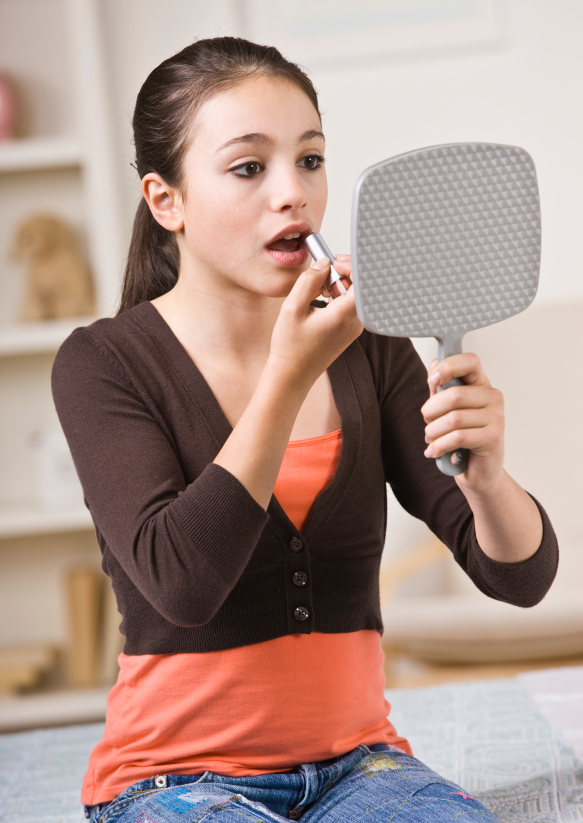 I remember starting seventh grade and asking — okay, begging — my mom to let me wear a little eye shadow and lip gloss. I wanted to wear more, but I knew that generosity has its limits. When I was about 15, my mom took me to the cool makeup counter at a department store and allowed them to “make me over” with the basics in a very subtle, age-appropriate way, something I learned to do on my own. Looking around at many preteen and teenage girls, I sometimes think we need more subtle makeup counter lessons…but not at 12!

Do you remember when you were a little girl? Did you want to play dress up in your mom’s clothes and have her sweep a little blush on your cheeks? I certainly did. According to Deborah Roffman, author of Sex and Sensibility: The Thinking Parent’s Guide to Talking Sense About Sex, that’s normal! She notes, “It used to be clear that little girls were just pretending to be older.” Unfortunately, things have changed. Roffman continues, “That’s not clear anymore. They are no longer emulating adults. Now, they are being treated as little adults.” She cites makeup and spa parties for little girls and asks, “What message is that sending?” Good question.

My daughter loves all things girly, and I love that about her. I let her wear her cute little tutus and her fun hair bows. I let her play with my makeup brushes and wear my ever-so-sexy flipflps — don’t miss the sarcasm there! – around the house. What I will not let her do, should she try when she’s still too young, is paint her face as though she’s competing to be the next Ms. America.

When your preteen asks…

Roffman simply says to tell her no. Have a discussion, but don’t back down. She suggests telling your daughter, “I value your childhood. Let’s talk about what it means to be an adult and what it means to be an 11 year old.” Basically, help her to understand that while her body is maturing, she’s not mature enough for certain things. And make sure she knows that while part of growing up means being given increasing independence, it doesn’t mean everything is open to her all at once.

In my opinion, adults sometimes have a hard time setting limits — or they’re too busy to do it. Some things are worth the fight, and maintaining your daughter’s childhood by not allowing her to begin wearing a lot of makeup when she’s still a kid should be one of those things.

54 mins ago
by Rebecca Padron

Meghan & Harry Are Changing the Way People Name Their Babies