Take an honest look at your preteen or teen’s style and clothing choices. Do you believe she dresses appropriately? And what what exactly can you do if she’s looking a little more Miley than Taylor? 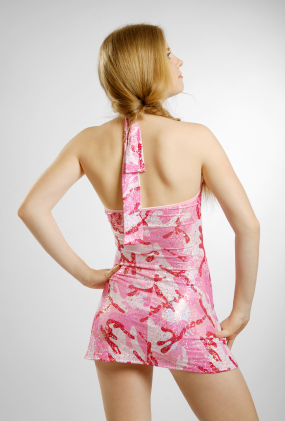 I’ll admit it. I occasionally see a 15 year old girl, dressed in clothes that would be more functional if she were working the corner than walking to school, and I think “Really? Where are her parents?!” Before you dismiss me as an old, out-of-touch grandma, I’ll tell you I’m 30 years old and I’m not ultra conservative. But I’m also going to fight tooth and nail to do everything I can to prevent my daughter, who is currently only two, from thinking that it’s okay to dress in a way that devalues her.

Where did we go wrong?

Deborah Roffman, author of Sex and Sensibility: The Thinking Parent’s Guide to Talking Sense About Sex, maintains that beginning in the early ’90’s, clothing and product marketers began targeting the younger set and the backslide just continued from there. The changes come slowly so that they’re not so shocking…until you find yourself looking at a group of 14 year old girls thinking, “What?!”

Roffman says that the whole “tween movement” is a huge part of the problem. And that makes sense. Think about it: there’s big difference between an eight year old and a 12 year old, but those two ages — and everything in between — are lumped together as “tweens.”

Does it really matter?

I think it does. I’d argue that a pre-teen or teen who dresses in a certain way is looking in the wrong place for attention or reinforcement about who she is. And there are long-term consequences for such choices. Roffman notes that the way young girls dress “affects their self image and what makes them valuable. It makes them vulnerable. There is only one reason to dress that one, and it’s to please somebody.”

And I’m not talking about a teen who wants to be different or express her individuality. I’m referring to teen girls who are dressing in ways that go beyond simply suggestive – girls whose style of dress is so overtly sexual that you’re unable to see past it.

If your daughter is still young, Roffman suggests you both remind her and show her what is appropriate. Don’t let her forget that she is a child. You want to set a good example and maintain your position as the parent.

With an upper elementary school girl, Roffman says to tell her, “I know you like to dress that way, but I am and have been the ‘limit setter’ in your life, and I will continue to be that. It’s my job.” While you ultimately draw the line – this isn’t a negotiation – you can still empathize with her. You can tell her why you’re setting boundaries.

I always say that she who controls the money has the power. Now, while that’s meant to be slightly sarcastic, it’s also true for young girls. Sure a 13 or 14 year old may have some babysitting money, but who is purchasing the majority of her clothes? And beyond money – maybe your 16 year old does have a job and she does buy her clothes – you are still the parent. Roffman notes, “The key is for children to understand they are not free agents. Parents are still in charge of some of the decisions in their life…” — at least until they graduate from high school. It’s not always easy to say no, but what part of parenting is completely effortless?

Still want to read about teen and preteen style?

15 mins ago
by Sydni Ellis