Arguing in front of your kids can beget more than just a frown and a few questions. It might just change the course of their lives. Here, we explore the effects of arguing in front of children and how to avoid potential damage.

Related story Ant Anstead Shares How His Kids 'Sense' That He's Happy with Girlfriend Renée Zellweger: 'You Can't Fake It'

We’ve all experienced it – you’re arguing with your partner angrily, and then see your child staring at you wide-eyed in the doorway. So the question becomes, what effect does arguing have on your kids? We asked marital experts Dr. John W. Jacobs, M.D., author of All You Need Is Love and Other Lies About Marriage, and Dr. Carol Ummel Lindquist, Ph.D., author of Happily Married With Kids, who let us in on three key things to remember.

1. Your Style of Arguing Makes All the Difference 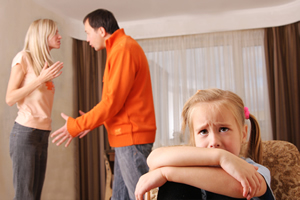 An occasional disagreement, call it a “heated negotiation”, during which you treat each other with respect and move into problem-solving, say therapists, is actually a good thing for kids. It’s considered a form of role modeling. But arguments in which you repeat the same points over and over, or call each other names, where you are venting resentments rather than solving problems, have no upside for the children. “If you bully one another, your kids learn to bully others,” Lindquist warns. “And they will turn that treatment right back on you once they are teenagers.”

2. It Could Affect Their Future Relationships

“Children start by being frightened by their parents arguing,” says Jacobs. “Later, they become disgusted. ‘How can they live like this?’ they wonder. Eventually, they develop a fear of being similarly trapped, and as adults may have the tendency to bail out of relationships early.” Jacobs says that while much is written about the damage caused by divorce, the damage is even worse for children whose parents stay in unhappy, bitter, explosive marriages.

3. You Can Minimize the Trauma

If kids witness a bad argument, don’t sweep it under the rug, says Lindquist, go ahead and apologize to them. Reassure them that you love each other. Mention specifically, in age-appropriate terms, how you would have liked to talk about the conflict. For example: “I’m sorry Daddy and I were arguing last night. We both feel bad when we say bad words. We can work things out better when we don’t interrupt each other and use soft voices.”

But you can only get away with this so many times, says Jacobs. After a while, the words ring false.

So in the moment when you find yourself getting carried away, call a time-out, he advises. Stop right there and agree to talk later. Then make a time to sit down and have a real discussion about what is bothering you — the bigger issues of your life and your marriage.

More on parenting from SheKnows: