Oscar-nominated actress Maggie Gyllenhaal is known for her more serious roles (Crazy Heart, SherryBaby), but this smart and talented actress shines in the heartwarming Nanny McPhee Returns. SheKnows chatted with Gyllenhaal on everything from raising a daughter in Brooklyn to making fart noises with Emma Thompson on-set. 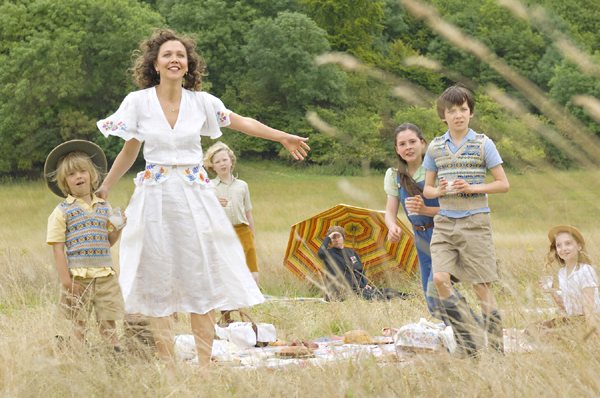 In Nanny McPhee Returns, Maggie Gyllenhaal plays Mrs. Isabel Green, a stressed-out mother who is trying to raise her children and tend to the family farm while her husband is away at war. Emma Thompson reprises her role as the magical Nanny McPhee.

The Interview with Maggie Gyllenhaal

SheKnows: If Nanny McPhee came to visit your house, what would she be helping you with?

Maggie Gyllenhaal: God, what would she be helping me with? I guess I feel like it’s changing all the time — what I’m struggling with as a mother, as a working mother. I kind of get a handle on things for a while and, you know, sort of get better at things as my daughter grows, and then something else will come up that’s equally difficult to manage. At the moment, probably the biggest thing for us soon is gonna be that my daughter is about to start a full day of school. That will probably present all sorts of challenges — but I do think that being a mother is made to be difficult. It’s made to be so difficult that it brings you to your knees. That’s part of it — that’s why it’s so gratifying. That’s why it’s so hard –and I think most mothers could probably use some help, some kind of Nanny McPhee help. Although I’m glad she goes to Mrs. Green because Mrs. Green has a particularly difficult challenge,  taking care of five children and running a farm and working for a dotty lady at the general store a couple of extra hours a week and doing it alone with her husband at war. I think she deserves Nanny McPhee.

SheKnows: You mentioned working with five kids, how was that on the set?

MAGGIE:  Well, I’ve worked with a lot of kids actually. SherryBaby was almost entirely me and this little girl. In Crazy Heart there’s a great little boy in that movie. The thing about kid actresses — the ones that I like — that really works in a film is when a kid is not a perfect professional and extremely experienced. I think it’s difficult to get a kid like that to act like a kid. These kids were not really seasoned professionals at all — they were just great English kids. But because they were children, there was a lot of time when Emma and I were on our knees behind the camera making fart noises. [One time] Emma literally threw herself into a pond to get the reaction that felt real and right and alive. 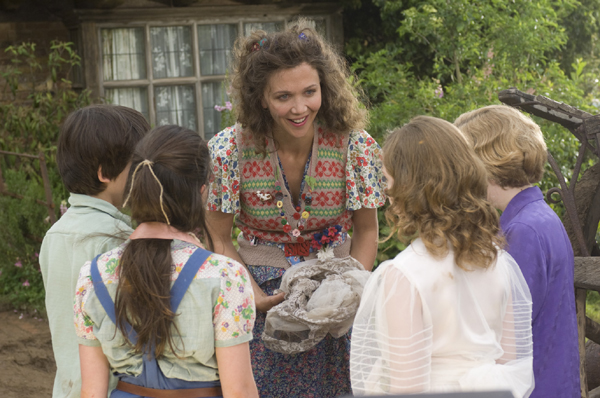 SheKnows: The farm you own in the film is a far cry from residing in Brooklyn. Which do you prefer, rural or city living? And do you feel strongly about raising your daughter Ramona in the city?

MAGGIE: I like Brooklyn a lot. My mom is from Brooklyn and grew up in Brooklyn. I was born in New York, but I grew up in California and I’ve been in New York for almost 15 years. I lived in Brooklyn in college and now I’ve been there for three years. I like it. Where we live is like, I mean it’s like Sesame Street where we live, like everybody is a different color and making different amounts of money and it’s kind of this amazing little spot. I think that’s very unusual. Ramona sees all sorts of things where we live.

But I don’t know that we’re gonna end up there, you know. I think right now my husband [actor Peter Saarsgaard] and I are in a stage where we’re trying to figure out where we want to live. We’re in the fantasy stage now completely — like my husband would be happy to live in Nova Scotia and never see anybody but us. I don’t know if I could manage that. [Laughs.] We think about moving to Paris — I mean it’s all fantasy right now. But I am more drawn to living in the country than I ever have been. And I think it has a lot to do with who I married.

SheKnows: Do you think that being a celebrity makes it harder to be a parent? Are you able to visit the parks and playgrounds without being bothered?

MAGGIE:  Mostly, yeah. I’m in Brooklyn and it really does help with that. Sometimes if we go into certain spots in Manhattan, I just know there will be paparazzi there — otherwise they don’t feel like I’m not worth crossing the bridge for. But in Brooklyn, we go to the playground, it’s fine. At the park every once in a while there’ll be someone, but it’s not bad.

An actress, I know was telling me that she can’t take her kid to the playground — I just think if that were happening to me I wouldn’t live where I’m living. There’s occupational hazards for every job and there’s a lot of great things about being an actress and having a child, one of which is that I get huge chunks of time with her where I’m not working.

Sometimes I wonder, because I have a good friend who’s got two kids and another one on the way who kind of works nine to five. Her kids are used to her going out and they know that she’ll be back for dinner every night and give them a bath and put them to sleep.

I’m around more, I think, if you added it up all the days I’m just with her all day — but sometimes I’m gone for a big chunk of time and I think that can be disorienting for a kid. I never travel without her, but sometimes I go to work when I’m on movies and then we have to go to work at 4:30 in the morning, and you come back at 7:30 at night and I’ve missed her for the day. When she’s used to having me around, I think that can be hard. 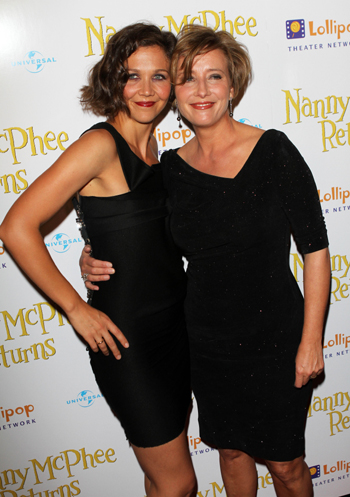 SheKnows:  What was it like to work with Emma?

MAGGIE: I’m in love with her. I love her. She became my friend. Emma is first of all such a good actress, [even though] I was only in a couple of scenes [with her]. But she’s also so wise and so smart and so strong and so thoughtful and so grown-up — but she’s not annoying, she’s a great time. She can go and have a bottle of wine with you and she can admit the mistakes she’s made. She was my beacon on this movie.

‘Fess up: any parenting mistakes?

SheKnows:  Is there anything you do as a mom that you swore you’d never do, but find yourself doing?

MAGGIE:  Yes, [laughs] like so many things. I think it’s funny when people have 6-month-olds — even that age where babies just lie still and let you dress them — and they are so judgmental. Like “I will never lose my temper.”[Laughs.] Or “I’m only going to feed them organic food” —  and then you’re on an airplane and it’s delayed and there’s just not anything. Yes, there are so many things. I don’t even want to talk about it, all the things that I swore I’d never do. [Laughs.] 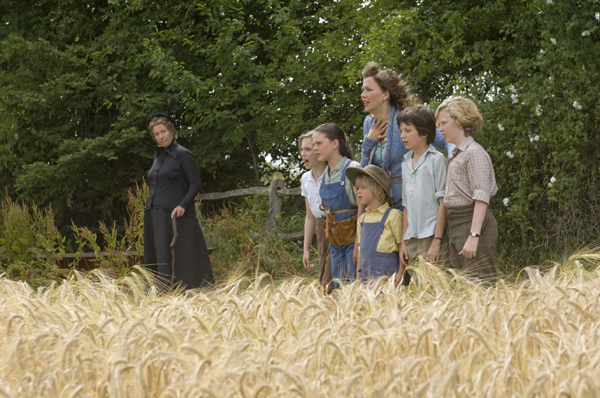 SheKnows: Have you had the chance to read the original books to your daughter? What are your favorite books for story time?

MAGGIE: No, I haven’t read her the Nurse Matilda books. I think she’s a little young. As my daughter has become more aware of what’s really going on in a lot of the books we read, I cannot believe how many books start with [something like] “Her mommy and daddy died randomly one day and she was left alone with nobody to take care of her.” That’s not cool at the moment with my daughter, and it’s kind of everywhere.

I was reading Winnie the Pooh the other day and there was a story where all the animals in the nursery tried to steal Baby Roo from Kanga. My daughter was like, “What?! What are they going to do with her?” That’s a good question, and it’s a sort of scary idea if you’re only four.

But even though this book does begin with “Our daddy died” (and let’s skip that part), I really like Brundibar,  which Tony Kushner wrote with Maurice Sendak. It’s a lovely book. My dad actually likes this old book called Little Mommy, which my mom gaveto her. My mom is like the feminist of all feminists — and in this book this little girl is like from 1945 or something. [Laughs.] It’s a good story, actually. She’s pretending to be her mommy and she’s doing all the things her mommy does. She washes the clothes and she hangs them up to dry and then she takes a cloth and wipes all the fingerprints off the knobs on the doors.

I also love this new book that Mo Willems wrote — he wrote the Knuffle Bunny books, which I love. This one is called City Dog, Country Frog, which is really lovely. That’s a couple.

Check out Maggie in Nanny McPhee Returns, which is out on August 20.