The Wiggles have entertained kids (and parents!) for 19 years with their infectious songs, TV shows and live performances. The fab four is made up of the red Wiggle Murray, the purple Wiggle Jeff, the blue Wiggle Anthony and the yellow Wiggle Sam. It is no surprise they are so popular. They are fun, energetic and they even manage to sneak in teaching kids about other cultures and languages. I spoke with Sam, the new yellow Wiggle, before their tour called The Wiggly Circus Live kicked off in late July. 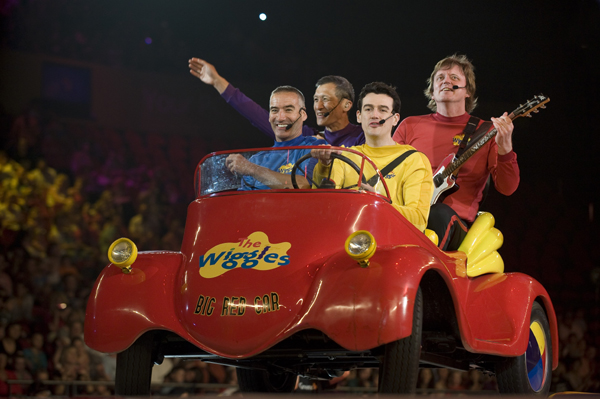 Sam Moran doesn’t seem to mind being called “The New Yellow Wiggle,” however he is hardly new to the group having performed with them since 1998. If he looks familiar, it may be because he was Professor Singalottasonga before replacing Greg Page, the original yellow Wiggle and founding member,  in 2006 after he retired due to illness. Page was diagnosed with orthostatic intolerance, which caused him to have loss of balance and increased fatigue. Moran was an easy choice to replace Greg, as he not only looks like him but is well- acquainted with the songs and dances.

I was scheduled to chat with Moran one Saturday morning. Expecting an initial call from his publicist to patch me through to him, I was pleasantly surprised to hear Moran’s Australian accent on the other line as we talked about everything from touring to marrying Dorothy the Dinosaur and fatherhood. 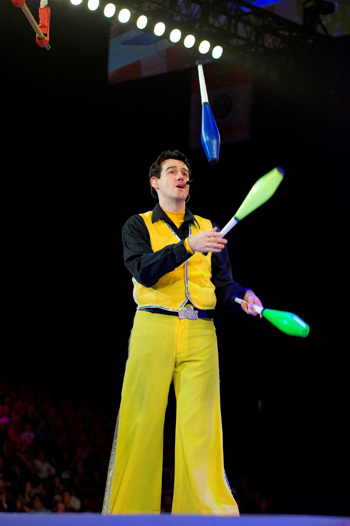 Touring with The Wiggles

SheKnows: Tell me about your tour, The Wiggles! Wiggly Circus Live.

Sam Moran: All of the favorites will be there, including Dorothy the Dinosar, Wags the Dogs, Captain Feathersword. It is full of acrobats, juggling and lots of songs!

SheKnows: It sounds physically demanding! How do you prepare?

SheKnows: Tell me about your history with The Wiggles.

Moran: I was Professor Singalottasonga and I was Greg’s understudy and performed over 200 shows until he became became ill – so I took over for him. He’s OK now, he’s doing a lot better now.

SheKnows: What was it like coming into this tight this knit group?

Moran: It was good. I have known them for 12 years and had toured with him.

SheKnows: You look a lot like him. How did fans react with you replacing Greg?

Moran: Very good. We Used it as a teaching moment. We were open about it and talked about it.

SheKnows: I know you guys get treated like The Beatles everywhere you go! Have you had any crazy fan experience?

Moran: I have only had positive fan experiences. People will tell us the positive impact we have had on them and it has only been postive.

Moran: It changes all the time! I like a lot of our new songs, but there are also a lot of classic songs that I like as well. 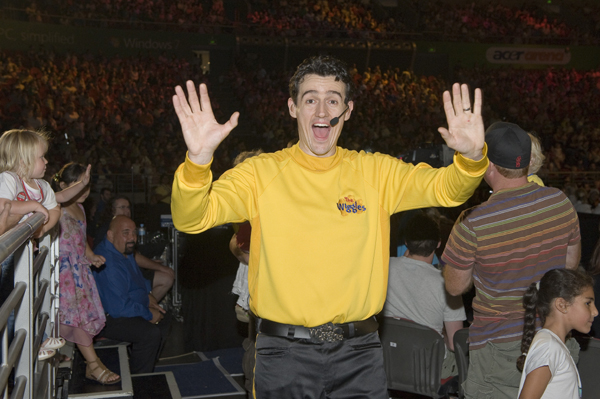 SheKnows: Any new songs we can expect from The Wiggles?

SheKnows: In the concert, what songs will you be singing?

Moran: Both new songs and all the classics as well.

SheKnows: What is new with The Wiggles and TV?

Moran: We have partnered up with Sprouts and host a show called “The Wiggly Waffle.”

Adding to The Wiggles family

SheKnows: You and your wife, Lyn, are new parents to a litle girl named Eloise Isabella. Do you love being a new father?

Moran: Yes, it is amazing. She is 6 months old. It is hard to leave her and my wife on tour.

SheKnows: I read your wife used to be Dororthy the Dinosar?

SheKnows: Do you get recognized when not in costume?

Moran: In Australia, yes. Especially if there are 2 of us together!

SheKnows: Do you live full time in Australia?

Moran: Yes – we all live in Australia.

SheKnows: Tell me about your upbringing. How did you get into entertainment?

Moran: I did take singing lessons and performed in amateaur theate, but I was also involved in sports as well.

SheKnows: I like the educational compenent of the Wiggles. Is that a concentrated effort to make it educational?

Check out Sam and all the Wiggles on tour! Find out The Wiggles summer concert tour date for Wiggly Circus Live to find out when they are coming to a city near you!