What could you do with an extra $40 to $100 every month? That’s probably what you’re paying for cable or satellite television, and it’s money you really don’t have to be spending. If you’ve never considered cutting cable, maybe it’s time to think about it. Take a look at the benefits for families. 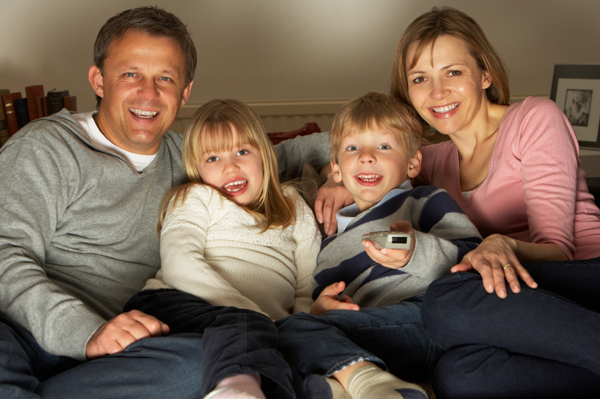 Cost was what originally prompted me to cut cable in our house. We had two televisions and two digital video recorders that could each record up to four shows simultaneously. That, coupled with the smallest digital cable package cost us about $80 per month. It made me insane to get that bill every month, and one day I couldn’t stand it anymore. I convinced my husband to let me cut cable for a trial period of two months. If he hated living without it, we could go back.

Cutting cable freed up about $70 in our monthly budget immediately (I’ll tell you where the other $10 went in a moment), and my husband was delighted to add that money to our vacation savings. An extra $840 per year towards vacation? That’s an extra night or two wherever we decide to go.

So how do we watch television if we don’t have cable? Well, we have a few ways. We got a Netflix subscription for about $9/month. These days, Netflix gets you the DVDs in the mail they were originally known for, but you also have access to an enormous amount of “on demand” content you can watch online.

We used Amazon.com gift certificates we earned through Swagbucks to buy a Roku player, which lets you put Netflix right on your television. In a truly brilliant move, Netflix has made plenty of kids’ shows available on demand — everything from Dora the Explorer to Wizards of Waverly Place — so my five children have plenty to watch. For me, there are sitcoms like 30 Rock, premium shows like Weeds that I didn’t have access to with my cable package, and plenty more. Full episodes, no commercials, and a whole season at once. There are also a lot of on demand movies, including newer content like Cloudy with a Chance of Meatballs and The Proposal.

I can go online and add content to my Netflix queue, which gives me a lot of control over what my kids can watch. There’s very little chance they’re going to turn on the TV and find something inappropriate. Our television viewing is much more purposeful now — instead of turning on the TV to see what’s on, we decide what we want to watch, and then we watch it. Sure, I’ll put on some Blue’s Clues for my little ones to watch while I try to sneak in a few minutes of work, but on a Saturday night, my older kids help us choose a movie for us to watch together. Instead of television being a way for us to avoid each other, it’s become a way to connect.

Sure, DVDs and on demand viewing are great for movies and shows that have already finished their seasons, but what about keeping up with pop culture? As a die-hard fan of Lost and 24, I was also worried, but I quickly discovered that Hulu.com offered me access to all the shows I cared about — legally, and for free. We hooked up an old Mac Mini to our television, and now the screen is essentially a giant monitor. We stream shows like Desperate Housewives, House, Parenthood — whatever we want to watch. Commercial breaks are 10-50 seconds, and the quality is great.

Go ahead, cut the cord! And let us know how it goes for you!

More ways to save money