Maybe dads aren’t typically thought of as having that certain je ne sais quoi. But we’ve all seen the way our kids’ faces light up when Dad comes in the door — even if he only left to go to the bathroom. So clearly, they have a few secrets of greatness, and we’re here to uncover them. 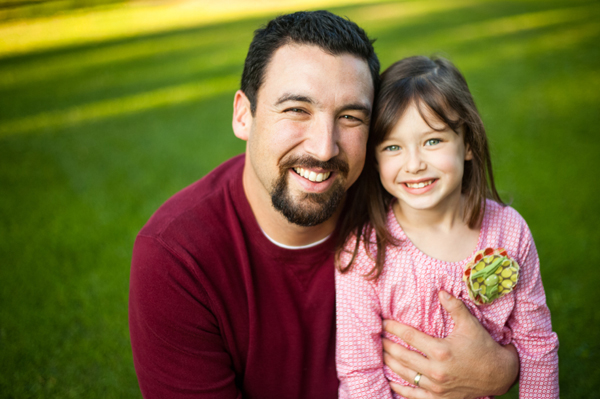 If you want to learn a new skill, you go to the experts. If you want to learn the secrets of great dads, you talk to my brother, Lex Friedman. For the record, I would have been thrilled to talk to my husband, too, because he is a totally awesome dad, but he is on the phone with a client, and I have a deadline. My dad’s in a different timezone and still asleep, and my brother — who happens to have the professional writer’s ability to answer questions in perfect soundbites — graciously agreed to share the secrets of his greatness, so there you go.

1. Fatherhood is its own reward.

You’ve seen the way your kids go gaga for Dad. Guess what? He totally knows how much they dig him. The love kids have for their dads is “unconditional and limitless,” says Lex. He even discovered that his looks have improved significantly since having children. “My kids are always telling me how beautiful I look,” he says. “On top of that, my wife observes how much our kids adore me, and thus has newly added reasons to find me charming. Win/win!”

I’m fairly certain that my brother was kidding when he said that breathing is the one skill all dads need to have. But he’s on to something: kids get upset. More frequently than we might like. Our response to that can determine whether the day goes well — or ends up in the toilet. “My preferred approach, and the one that I’m proud of, is trying to keep my own calm to help bring on theirs,” says Lex.

3. Learn from your mistakes.

Hey, we’re human. We make mistakes. But it’s what we do next that matters most. “I Monday-morning-quarterback any interaction with my kids that I think has gone less than favorably,” says Lex.

How about an example? “Anya, was it nice when I yelled after you dropped my iPhone on my toes? No, no it wasn’t, because you didn’t do it on purpose, and everybody drops something sometimes. I was upset because I was worried about my toes and my iPhone, but even if I’m upset, I shouldn’t yell at you for doing something accidentally. I’m sorry I yelled.”

Notice what my clever brother did there: he managed to work in the fact that he owns an iPhone. (I don’t have one, and he knows I want one.) But he’s also given my lovely niece the chance to see that her dad is not infallible (Oh, Anya, I could tell you stories…), that it’s okay to make mistakes — and he gives her the power to forgive him. And, he swears that her response is generally along the lines of, “Aw, that’s okay, Daddy. And I’m sorry I dropped your iPhone. Again.”

4. You have all the experience you need.

A lot of dads worry that they won’t know how to parent their kids. Moms have the full nine months of pregnancy to get maternal, and an entire industry caters to women who parent children, but dads often feel they’re left to their own devices. Not to worry, says Lex. As long as you experienced childhood yourself, you have what it takes.

“I remember more about being a kid than I realized,” he says. “Kids can often get worked up and stressed out for reasons that defy any sane semblance of logic. But I have strong memories of my own life views and experiences as a child, and I think those really positively affect my interactions with my kids.“

A good dad recognizes that at times he will encounter a situation that he has no idea how to handle. In such cases, advises Lex, “Go ask Mommy.” Sound advice, and he’s only half-kidding: “If it’s not an emergency, I’ll definitely try to check with my wife,” he says. He also recommends that every parent take advantage of the always-on-call medical professional that is Dr. Internet.

6. Know that it gets easier.

That zero-to-one transition is a doozy, to be sure. Babies are a lot of work, particularly when you’re just starting to learn about this whole parenting gig. And withholding sleep is a particularly awful form of torture. “But,” says Lex, “things get easier, as they get more self-sufficient, and you get more sleep. I mean, more confidence. Okay, both.”

Too true, too true. Happy Father’s Day to my brother, my husband, my dad — and all the other amazing dads out there.