Have your kids gotten in on the Silly Bandz craze? The $5 packs of rubber bands in the shapes of animals, letters and other fun items are worn on wrists like bracelets — but educators say this fad has become a distraction, and they’ve been banned in many schools. What’s the deal? 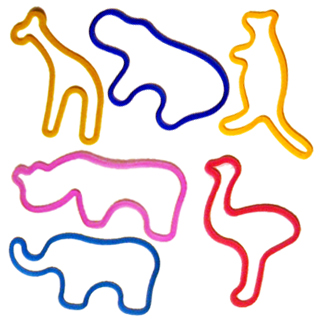 In the grand tradition of fads that kids adore and parents tolerate, Silly Bandz have swept the nation. Kids collect and wear stacks of colorful, irregularly shaped bracelets (Bandz), and trade them with each other. The $5 per package price has made them accessible to most kids, and the variety of colors and shapes, which range from animals to fantasy to sports, appeals to most.

The popularity is evident in the many stores that have sold out of the Bandz. (Anyone having flashbacks of WebKinz and Beanie Babies?) Meanwhile, some schools have begun banning Silly Bandz, calling them nuisances that disrupt class and foster negative behaviors.

Kids have been wearing Silly Bandz for months, though recently the popularity has skyrocketed. They’re innocent enough, but when teachers and administrators began to see kids fiddling with the Bandz during class, they began to fall into disfavor. Another concern is that some kids weren’t trading fairly. Schools in many states, including New York, Texas and Florida, have banned Silly Bandz as a result. One elementary school principal said, “When this became a problem, I knew we had to nip it in the bud pretty quickly.”

“I agree that, if SillyBandz create problems, the trading activity needs to have limits put around it, but I hope schools don’t just ‘nip it in the bud’ as a knee-jerk reaction,” says Amy Tiemann, PhD, author of Mojo Mom and editor of Courageous Parents, Confident Kids — Letting Go So You Both Can Grow.

Now that bans on the Bandz are being enacted, Silly Bandz are getting a lot more attention. From mainstream media to mom blogs, everyone is talking about the funny, if not ugly, bracelets.

For many moms, this harkens back to the trading fads of yesteryear. Back in the 80s, stickers and Garbage Pail Kids cards were huge. In the early 90s, slap bracelets caught on (and got banned) in short order. Yu-Gi-Oh cards in the early 2000s made a big splash, too. “If it isn’t fixation on Silly Bandz, then it would be something else,” says mom of three Michelle Morton of North Carolina.

Other parents agree. “To me, Silly Bands are just good old fashioned fun. When I was a kid, we had mood rings. We were all crazy about constantly checking our moods. I’m sure it drove our parents and teachers crazy, but it was just part of growing up. People should lighten up,” says Chris Miller Jamison of Pennsylvania.

The educational value of Silly Bandz