Now that you’ve tackled diapering, crawling and childproofing, you are officially ready for the next step…walking! By the time your baby hits 9 months, they’re going to start testing their limits and that means you will start seeing the early stages of your little one attempting to walk. It usually starts right near a couch or table with the baby attempting to pull themselves up with support from the table top or cushions. 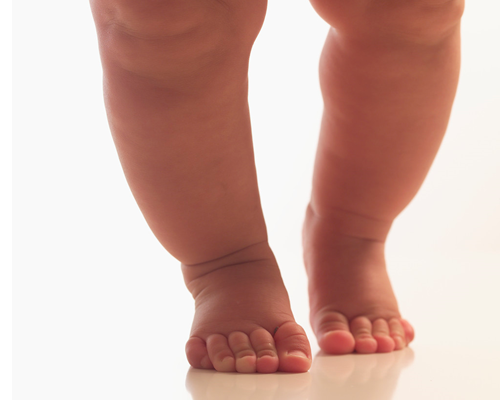 Before you know it, they’re cruising around the table and testing their limits. Now don’t expect them to be taking their first steps without support until they’re at least 12 to 13 months, but you can help them gain their footing.

Don’t be so quick to get your little one fitted for their first pair of walking shoes. They’ll actually learn more quickly how to walk in their bare feet. Make sure you remove their socks so that they don’t slip on the floor.

Do not use a walker!

Walkers can be very dangerous for a baby just learning how to maneuver from crawling to their first steps. The last thing you want to put in their hands is a walker that could topple over near steps in your home.

Use pull toys to encourage walking

I still remember how my daughter would pull her toy puppy along and as she began to start walking, she would pull it along the room and squeal in delight as her little pet joined her.

A Walk with A Hug

Sit on the floor with two to three adults and stretch your arms out wide. Then let your baby walk from one person to the next. It is so much fun to watch them start out taking a few steps only to wind up in your arms when they reach their goal.

The first time my daughter took her first steps, she was with her friend Cooper. Cooper and Becca were born a few weeks apart and experienced all those early milestones together. Including the night when the two of them stood up and walked into our arms. It was one of those nights we will never forget and even after nearly a dozen years, we still reminisce about the day our babies took their first steps!

3 hrs ago
by Heather Marcoux

4 hrs ago
by Heather Marcoux