You know that every time you take your infant for a well visit, you are doing the best you can to keep her healthy, but that doesn’t make her tears any easier to bear. Find out which shots are priority, and which can wait. 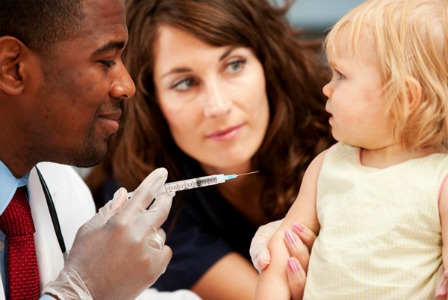 In that first year, you will find that your child will have to receive more than a dozen and a half immunizations — sometimes four and five at a time. But which shots are the ones they should be getting immediately and which can you hold off on until your baby is a little older?

We asked bestselling author, pediatrician and host of the syndicated talk show The Doctors, Dr. Jim Sears about babies and shots and here’s what he had to say:

SheKnows: How do you decide what immunizations my baby should get right away?

Dr. Jim Sears: Immunizations are such a complex subject but the main focus should be on how to protect your baby. We’re immunizing against meningitis, pneumonia, blood infections and we’re also protecting against things like polio… and while certainly [it] was serious in this country, the risk of being exposed to that today is not as high. We’re also going to protect against whooping cough which is very important.

SK: In terms of priority, which illnesses should parents be most concerned about in their baby’s first year?

JS: Sometimes it’s hard to answer since I won’t know what your child is going to be exposed to, but a few general thoughts I say — certainly your risks of being exposed to polio is a lot lower than the child’s risk of catching one of these other illnesses like whooping cough. The chance of getting whooping cough is very high and if your child is 2 or 4 months old and they catch that, it can be really serious — that can be fatal.

When I have a parent who says, “Look I’m not going to give my child all four of those shots at one time, what shots do you want to do first Doctor?” I say OK, we’re going to do the ones against meningitis and whooping cough and the pneumococcal vaccine and the HIB vaccine, the DTAP and then I say, but we still need to get the other ones in. You still need to get hepatitis and polio in at some point.

SK: What do you think the biggest concern is among parents and their baby’s immunization schedule?

JS: I think a lot of parents have a problem with the number of shots their child is supposed to receive at 2 months, 4 months and 6 months — they’re getting four to five shots. If a parent does have concerns, I have them come in a little more often in addition to the baby’s regular check-up visits (2, 4, 6 month). By encouraging them to come in in between those visits, for just shot-only visits, they don’t get too far behind. They do two shots at a time and I see them a little more often and by the time the child is a year-and-a-half, they are still very much on schedule.

SK: How do you approach immunizations that are not necessarily required for infants like the chicken pox vaccine?

JS: The chicken pox is one of those iffy ones because while the child is younger it’s not super required — it’s still a recommendation. Once the child goes off to school, it’s still one of the requirements. The parents that don’t want to get it at the recommended 1-year-old time — by the time they are 4 or 5 and going off to kindergarten, it’s time they do it because this kind of brings up one of the other aspects — you have to protect the other people that your child is going to be around.

SK: What are the dangers involved if a child doesn’t keep up with their immunizations?

JS: There’s a social impact to not being immunized against certain diseases. If your child catches Rubella and goes off to preschool and gives it to her teacher who is pregnant, her unborn baby could be affected and that is dangerous. A lot of moms are not immune — they got the shot a long time ago but the effects may have worn off as an adult. So we’re giving babies and children vaccines to protect those people around your child. Sometimes parents forget about that.

For a list of required and recommended vaccines in the first year of life, visit Ask Dr. Sears, which provides a list and vaccination timeline from the American Academy of Pediatrics.

Additionally, according to the American Academy of Pediatrics, the vaccines recommended for use in all children do not interfere with each other and, as needed, can be safely given together during a single visit. According to the AAP, research has shown that when multiple vaccines are given together, the side effects are no greater than when immunizations are given individually.

For more information on immunizations and your baby’s first year, visit HealthyChildren.org.