It’s common knowledge that many women are routinely miffed with their mates. Men aren’t paying attention to the details, don’t contribute their fair share around the house, and what they are doing isn’t being done right anyway. But for all of the anger, consider that many fathers today are struggling partly due to the absence of a meaningful fatherhood role model. They have to simultaneously rediscover fatherhood and redefine it in a period of social and economic change. 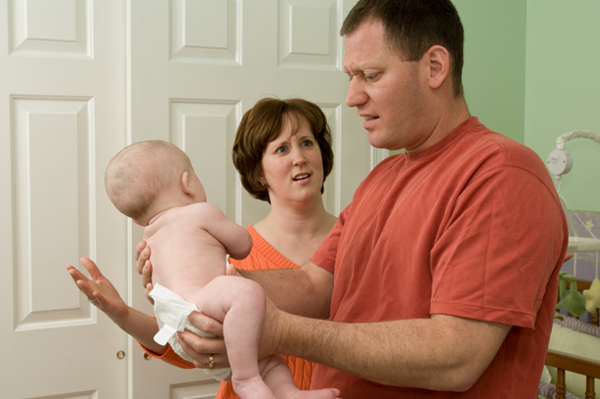 While there are legitimately lazy and narcissistic men, there are other husbands and fathers who are trying to step up, but simply don’t know where to start. As one father of three boys told me, I want to help around the house, but I don’t know what to do.

Let me share some statistics. The divorce rate peaked at about 50% in 1991 and while it has declined, it’s still steep. A first time father today is 33 years old. Assuming that divorce was equally likely in a family with children, then roughly half of all first time fathers today come from a household in which the father figure was removed while he was in his early to mid teens. Throw in the prolonged conflict that typically precedes any divorce and the father’s absence afterwards, then the fatherhood model was damaged for the children left behind. So what does it mean to be a father? For him, he sees a father as a guy who contributes to a tense environment and then leaves outright or is marginalized by custody decisions.

The effect on boys through all of this was more pronounced than on girls. His role model – flawed or otherwise – was removed while the daughter still had the mother present to serve as a role model. And the girls saw mothers who often developed into strong figures because they had to for their family’s sake. The immediate effect on the boy was to turn away and withdraw from the family; a significant portion of drug usage is attributable to a desire to escape the emotional pain of broken families. So a significant number of today’s fathers turned inwards and tuned out the family during years that in previous generations would’ve provided grounding in basic fatherhood.

While divorce sundered a large number of American families, there have also been massive social and economic changes to the family and fatherhood. Society’s view of the father diminished dramatically and the recent recession struck men – and fathers – significantly harder.

The American popular media’s perception of fathers has changed dramatically with the decline of the family. Television is formative and while it doesn’t define us, it reflects our opinions and values. The earliest programs depicted fathers – whether you agree with it or not – as benevolent, wise and authoritative; think of Ward Cleaver and Ozzie Nelson. But with the advent of the 1970s, men and fathers were viewed as more of a comic offset to the frequently wiser and tolerant wives. Archie Bunker and Sherman Jefferson weren’t complete buffoons but writers and producers were now giving nods to the notion that women really were equal partners. While there were later solid examples of American fathers – The Cosby Show’s Clifford Huxtable and Seventh Heaven’s Eric Camden – they were more than offset by Al Bundy, Homer Simpson, Hank Hill, Peter Griffin and Stan Smith.

Today’s most memorable television fathers are cartoons. I occasionally wonder how many television writers, producers and creators grew up in a divorced household.

An economist at the University of Michigan coined this last recession “the man cession” because job losses were borne significantly by the male-dominated construction and manufacturing sectors. In some months, men lost upwards of 70% of the jobs and these sectors are still stagnant in terms of job creation. More men are now at home and are trying to take on household duties while struggling with job loss. The other part of the economic component is the necessity for many women to work to help provide for the family as wages stagnate. Women have stepped up to the plate and are understandably irritated when they get home from work to find that dinner’s not made and the kids need valentines for tomorrow’s party.

It’s not a rosy scenario for the American father. But before you write him off as useful as the family Cocker Spaniel, take a larger picture look at the hand that he’s been dealt. This is the first generation of fathers who are explicitly being asked to take, if not volunteering for, a legitimate role in managing the household and rearing the children. Talk about mutual expectations and explicitly agree upon who’s responsible for particular areas, then ask for and provide an honest appraisal of the knowledge base and skill set for those various responsibilities. God alone knows the clothing that I ruined before becoming competent at laundering.

But don’t hope too much for multi-tasking because we’re lousy at it.

For more from Don Harrold, check out www.practicaldad.com.

7 hrs ago
by Amelia Edelman

Adorable Animal Stickers for Your Little One

12 hrs ago
by Amelia Edelman