Remember all the things your mother did that you swore you’d never do? Amy Wilson does. And she writes about how she does them all in her book. 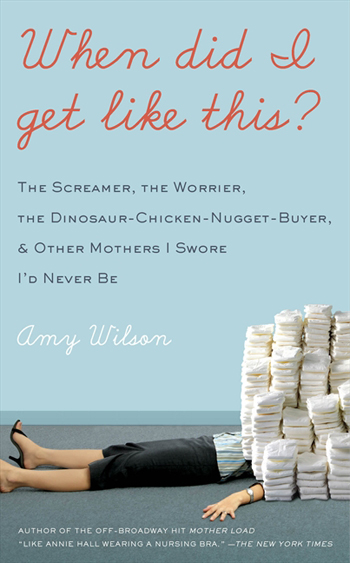 We’ve all had those moments. Maybe you find yourself peering at the contents of your newborn’s diaper by faint glow of a nightlight, promising candy to a whiny toddler at the grocery store in exchange for peaceful shopping, holding a terrified child’s hand as a doctor stitches up his face or watching in disbelief as the teenager you just grounded makes to leave the house anyway, with your car keys.

Because I said so!

Whatever happens, there’s that moment — and more likely, a lot of moments — when you look at yourself and your life and you think, “What the heck happened?” You hear words coming out of your mouth: “You’ll poke your EYE out!” or “I’m going to count to three,” or, God forbid, “BECAUSE I SAID SO,” and you think, “When, oh WHEN, did I get like this?”
And that’s when you need to pick up Amy Wilson’s book, appropriately titled When Did I Get Like This? (William Morrow), and lock yourself in the bathroom and read it and try not to let the kids hear you laughing.

One reason Wilson’s book is so enjoyable is that it’s amazingly relatable. You may not recognize yourself on every single page, but you will find yourself nodding in agreement an awful lot. Her Irish Catholic background gives Wilson great insights into the guilt all mothers feel, starting from the moment they realize that even fruit, with its built-in sugars and carbs, are “bad for you” during pregnancy.

She writes about the ridiculous standards to which our enlightened, modern society holds mothers — but she does it with humor. She tells of attending a La Leche League meeting looking for support in giving an occasional bottle of expressed milk and being treated as though she had suggested feeding her infant liquid bleach. She shares stories of the cutthroat world of New York preschool applications. She tells of watching her kids melt down because she bought the wrong kind of bagel. And it is laugh-out-loud funny, even as you feel your own twinge of guilt, because Wilson lets you know that you shouldn’t have to feel it.

You know how your husband will suggest that you should all go somewhere as a family, then totally bail on you while you juggle diaper bags, clothing changes, shoe tying, hair brushing, and the forty-seven other things that have to happen before you can leave the house? Wilson captures it perfectly.

How about the conversations you KNOW your children have with each other about who will be on duty for the day’s meltdowns, tantrums, and other bad behavior? Wilson nails it — right down to the speech patterns and sweet lisps.

Remember the time you flew alone with your children and one of them threw up on you repeatedly and the flight attendant acted like it was your fault? OK, maybe that was just me — but it also happened to Amy Wilson, and I laughed so hard I cried when I read her description of it.

If your Mother’s Day gifts were of the homemade variety — not that there is anything wrong with artwork lovingly prepared (by which I mean, thrown together in approximately seven seconds and consisting primarily of glue and glitter) by your children, you may be feeling a bit under-gifted. So treat yourself to a copy of Wilson’s book. You deserve it.

Here’s What to Do With That Expired Car Seat

These New Viral Internet Challenges Have Parents Terrified — But Should They Be?