Miles revs his dirt bike’s whiny engine to life and whizzes by patches of verdant trees. Joel rides a safe distance behind, giving his grandson room to experiment and gain confidence in his abilities.

‘To us, it’s like heaven,’ says Joel, of what it’s like to blaze through trails alongside his 15-year-old grandson, Miles.

Like many granddads, Joel, 55, isn’t satisfied taking the grandkids to amusement parks or shopping for toys. For him, zipping around on dirt bikes is the best way to spend an afternoon or weekend with his grandson. 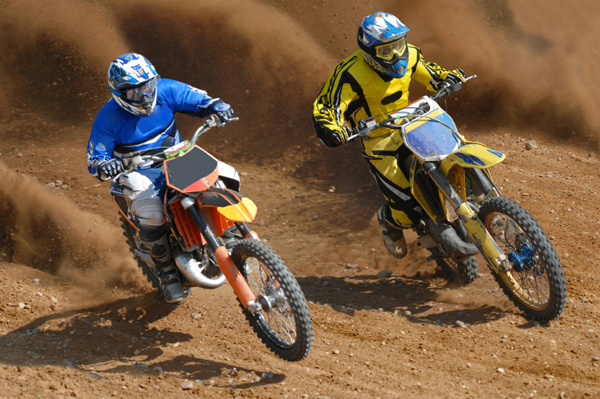 It was when Joel was around his grandson’s age that he first discovered motorcycles. At 18, he quit college to embark upon a European motorcycle tour. The experience inspired in Joel a lifelong love of motorcycles — a passion his grandson is now discovering for himself.

On a spring weekend earlier this year, Joel picked Miles up from school and the two headed to Hogan, West Virginia, to rally with a group of riders at the Hatfield McCoy Trail System, a newly established series of trails.

“It was a nine-hour drive, but I had a really good time talking with him,” says Miles of the trip.

That weekend, Joel and Miles logged some 40 miles of trails marked by stops in the sleepy Appalachian towns that intersect the 500-mile route.

The ride exposed Miles to a different way of life. The once coal-rich region is now dotted with shacks and trailers where people languish in poverty. Miles had never before seen such living conditions.

In this way, the dirt-biking experiences allow grandparents and grandchildren to cultivate a relationship that goes beyond the parental. Rather than harp on his grandson to improve his grades or brush his teeth, while on the dirt bikes Joel and Miles can tear through muddy puddles and windy terrain side by side and experience something new together.

“I’m not his parent and I don’t try and treat him that way. I just try to give him choices and let him see his choices. I think it’s good to let him try and do things himself,” says Joel. “It’s interesting to watch him deal with frustration and great to watch him learn.”

Miles doesn’t seem to mind falling from time to time, and knows that when he does, it’s not a failure by any means. “I enjoy crashing on my bike and having my granddad fix it. When I wreck, he stops and waits for me. I feel like no other person would do that for me.”

Joel and Miles aren’t the only ones whose motorcycle-charged relationship has grown.

Roe, 56, is one of many grandparents breaking the grandparent mold. Not only is Roe a biker, she’s also a pilot, a former professional ballroom dancer, a competitive bodybuilder and a salon owner. Somehow, she always finds time to ride her hog.

“My oldest granddaughter is [almost] 22. She’s ridden everywhere with me and she absolutely loves it,” says Roe, who lives in Sarasota, Florida. “My grandkids are so proud of me. They tell everybody, ‘My grandma rides a motorcycle.’ “

“I think it’s awesome,” says her granddaughter, Natasha. “She has the grandma love, but puts a little spunk to it. It makes life more exciting hanging out with her.”

Even though she got to see her grandmother only a few times a year while growing up, Natasha says Roe was her biggest inspiration. “The people around me just couldn’t compare,” says Natasha.

The highlight of each of their visits was the ride. Natasha still recalls one afternoon’s Poker Run. In this motorcycle scavenger hunt, the pair chased clues and poker cards all over town, competing against other bikers to see which team could snatch up the best hand.

They didn’t win the hunt, but Natasha and Roe still walked away with the memory of a lifetime.

“They totally respect me as a grandparent,” says Roe. “They would never get in my face, but they’ll call me for advice all the time. We share a lot of things. They talk to me more about personal things because I’m out there and see a lot of things.”

Grandparents such as Joel and Roe are hipper than their predecessors and, no doubt, have had a hand in inspiring their grandchildren’s dreams.

Joel’s grandson Miles has big plans for his 18th birthday. “After high school, I’m planning on touring Europe with my brother, another friend and — who else? My grandpa,” he smiles.

Up next: Top 5 US motorcycle rides