There’s nothing quite like going to a professional sports game. Whether it’s baseball, hockey, basketball, or football, it’s quite the spectacle. Athletic superstars in action, competition, hometown pride, and all that. But is it really a place for kids? Given the expense and effort of going to a professional sporting event, it’s best to have some knowledge and a plan before you commit to a family day at the sports arena. 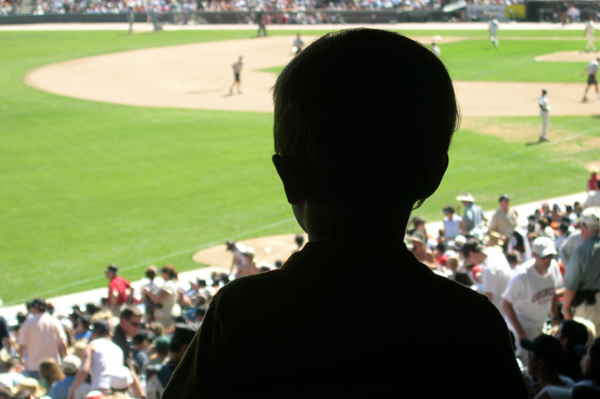 I recently took my son to a game of our local NFL team. Neither of us had been to an NFL game, and we were extremely lucky to get great tickets through a coworker who has season tickets. As we’ve
been to a number of major league baseball and soccer games, I expected the traffic and the crowds and even expected a few rowdy fans. I didn’t expect certain aspects of the culture that were, uh,
less than savory – and even downright offensive. We had a good time (the game itself was great) but I was glad it was my oldest who was there, not my youngest or even second youngest. And, sadly,
neither my son nor I want to go back.

It doesn’t have to be this way, though. Some events, yes, will be better than others, more family friendly than others. With some advance thought and planning (in addition to buying tickets and
having directions to the stadium) you can make the best of what should be a very fun event, hopefully mitigating most of the downsides.

Think about the individual team

Individual teams have individual personalities and their fans have reputations. If your local team and their fans have a good reputation, great. If they don’t, however – if the fans have the
reputation of being particularly rowdy or crazy – you may want to think twice. It doesn’t mean all games and arena areas will be crazy, but you do need to be aware of the possibility. Know what you
are taking your child into.

Look for family-friendly days and areas

Many teams have family days and/or family friendly seating. Team ownership is aware that the key to their future is good experiences by younger fans today. Family days might have ticket packages at
reduced rates and in specific seating areas. In many stadiums there are alcohol-free seating areas, too. And don’t be afraid to report violations of policy that are impeding your enjoyment of the
event.

For full enjoyment of a game, consider not only the time of day that a game takes place, but also the time within the season.

Taking young kids to a night game is often a challenge; will your child be able to handle it? They can get tired and cranky as the night games wear on – and maybe more intensely so given the
excitement of the event. You may not be able to stay for the whole game. Afternoon games, however, are more family friendly.

If the local team is in playoff contention, the games later in the season may get more intense than games earlier in the season – on and off the field. You might want to consider this as you make a
game plan.

Think about the minor leagues

Professional sporting events doesn’t always mean major leagues. Minor league teams (particularly baseball and hockey) offer terrific family experiences. You can get closer to the play, closer to
the players – and may even see a future superstar in development. Tickets cost much less, too.

At the least, a teaching opportunity

Even the most well-planned outings to sporting events can encounter less than ideal behavior of others. This can be an opportunity for discussion between you and your child, from choices about
language and substance abuse to simple sportsmanship. They may not be the conversations you were anticipating on having that day, but they can help you keep lines of communication open.

More on kids and sports: