With our busy lives and schedules, we moms need to save time wherever we can. That especially holds true in the kitchen! Instead of slaving away over the stove seven nights a week, why not get the most bang for your buck while still presenting a different dish every night of the week? Here we give you some simple meal ideas that can be reinvented on night two for a totally different dinner. 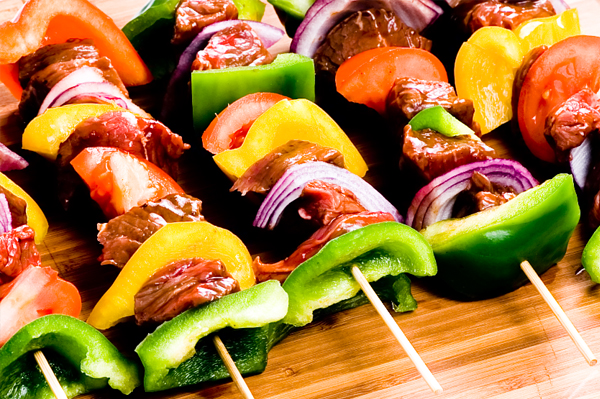 Store-bought rotisserie chicken is one of the greatest inventions since sliced bread! They are so delicious just as they are – so on night one, simply serve slices of the chicken along with some mashed sweet potatoes (simply cut potatoes into cubes, boil until soft, and mash with a bit of butter, brown sugar, a dash of cinnamon and a sprinkle of nutmeg) and green beans (there are some great steam bags that you can just pop in the microwave). Voila! Night one is done.

For night two, shred the leftover chicken, heat up a microwave packet of Spanish-flavored rice and stuff large, plate-sized tortillas with the chicken and rice, along with shredded cheese, sliced black olives and green onions. Fold into burritos and put them in a baking pan. Bake for 20 minutes at 350 degrees or until hot and melty in the middle. Top with extra shredded cheese and serve on a bed of shredded lettuce.

On night one, thread 1-inch cubes of beef tenderloin, onion, tomatoes, zucchini, bell peppers and mushrooms (or any other veggie you desire) onto skewers (if you are using wooden ones, be sure to soak them in water for 30 minutes prior to grilling), sprinkle with salt and pepper to taste and put them onto an indoor grill for about 10 to 12 minutes (be sure to rotate them as you are grilling).

On night two, chop up the leftover meat and veggies. Heat it up just until it’s warm, then stuff it into pita pockets and top with sprinkles of feta cheese. Make a cucumber yogurt dipping sauce using the following recipe:

Directions:
Blend it all together in a food processor and chill for about 2 hours before serving. (Tip: Make this on night one and refrigerate over night.)

Night one can be prepared before you head out the door for work. Simply let your crock pot do the cooking! For this pulled pork recipe, you’ll need 4 pounds of pork butt or shoulder, 1 bottle of barbeque sauce, 2 large onions, and 1 cup of ginger ale, Coke or Dr. Pepper. Slice the onions and line the bottom of the crock pot with half of them. Add the pork, the remaining onion slices and the soda of your choice. Cover, and set on low for about 12 hours. Once the meat is tender, shred it with two forks, serve with barbeque sauce, hamburger buns, store bought coleslaw and corn (a microwavable steam package is a cinch or you can boil some ears.).

On night two, soften some corn tortillas (about 8 to 10, depending on how much pork you have leftover) by heating them in a pan with some oil. Just heat them long enough to soften them, not brown or cook them. Spray a 9-by-13 pan with Pam. Place a little of the shredded pork into each of the tortillas along with some shredded cheese (such as a Mexican blend), diced onions (1/2 cup total) and jalapeños (1/4 cup total, or to your taste preference). Roll the tortillas and place them in the pan until it’s filled. Top with some store bought enchilada sauce and more cheese. Bake at 350 for 25 minutes, or until cheese is melty and bubbly. Serve with refried or pinto beans and sour cream.

How Rihanna, Camila Coehlo, & More Are Redefining Pregnancy and What Motherhood ‘Looks’ Like