Some may think the Hanukkah holiday is simply the Jewish version of Christmas and while there are some similarities (the abundance of presents and greasy finger foods, for example) the holiday’s inherent meaning is about more than materialistic pursuits. Although receiving eight presents is a pretty darn good fringe benefit! Singer Mama Doni of the Jewish indie-rock bank The Mama Doni Band shares eight tips for eight nights of fun family togetherness. 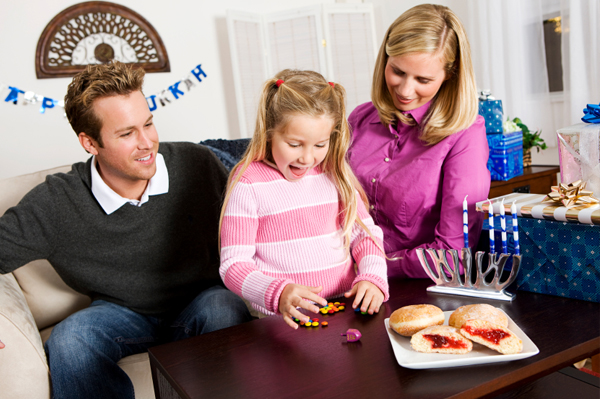 What is the meaning behind Hanukkah traditions, such as the traditional lighting of the menorah?

The history of Hanukkah

During the second century B.C.E. the Jewish people’s holy temple was desecrated and they were denied their basic religious freedoms, which if practiced were punishable by death.  A
group of brave Jews, knows as the Maccabees, banded together, fought their oppressors and ultimately reclaimed their holy temple.

Unfortunately, as a result of their temple’s desecration its seven branched candelabrum, also known as a menorah, whose light always burned bright had been snuffed out. The Maccabees could
only find one night’s worth of olive oil to keep it lit. The miracle of the Hanukkah holiday is that this menorah burned for eight days on just one night’s oil hence today’s
present day Hanukkah tradition of lighting a menorah for eight days to commemorate that awesome miracle.

So just how can families celebrate this festival of lights, in addition to lighting their menorahs each night? Doni Zasloff Thomas, a.k.a. Mama Doni,  the lead singer/songwriter of The Mama Doni Band a wacky, Jewish indie-rock band for kids who has just released their new album, Chanukah Fever offers her eight tips for
eight days and nights of Hanukkah FUN!

Start the holiday off right with a fun latke contest! Latkes are the top food of choice on Hanukkah. They’re the potato pancakes cooked in oil to commemorate the oil from the Hanukkah
story.

Gather some friends and make the traditional latkes, but then ask everyone to think of a special ingredient to throw in. You can try making carrot latkes, apple latkes, banana latkes; you can even
make a latke sundae with sprinkles! Kids can be the judges of who is the “Latke Top Chef!”

Day 2: Get Your Dreidel On

It’s dreidel night! The dreidel is a four-sided top, etched with Hebrew letters which stand for the phrase, “A great miracle happened here.” This is a chance for kids to do a bit of gambling
— for chocolate coins! Get yourself some dreidels and some gelt (instead of gelt, you can also use chocolate kisses or lollypops, or you can go healthier and play with fruit snacks or boxes of
raisins).

Everyone spins the dreidel and depending on what Hebrew letter the top lands on, you either win all of the candy (gimel), half of the candy (hey), none of the candy (nun) or have to give one back
(shin). By the way, make sure you blast the “La Vida Dreidel” song when you’re playing this game, and take some dreidel dancing breaks!

Day 3: The Land of Jelly Donuts!

Did you know that Jelly donuts also known as “sufganiyot”, are a traditional Hanukkah treat?  Now imagine a whole world made of jelly donuts?! Jelly donut-boats, jelly streams, jelly birds,
jelly donut houses!  After you have eaten your delicious jelly donut, draw a picture of what you imagine a Jelly Donut Land would look like to you. Where would you live, what would your
house, school, friends, look like? Hang your picture on the fridge!

On this day, everyone gets out a piece of paper and thinks about 8 things they are most grateful for in their life.  Everyone makes their list and reads it to each other.