You’re always careful with your kids at the park. But what if the thing you think is keeping them safe is actually putting them at risk for serious injury? 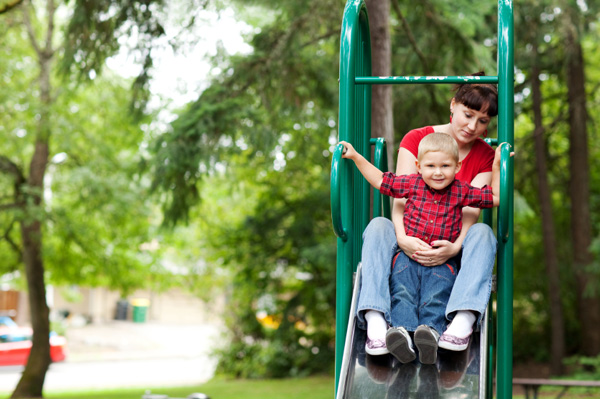 You’re at the park with your toddler. After three hours (okay, fine, maybe it was five minutes) of swinging — with you pushing the whole time — she decides she’s ready for the slide. You make your way over to the play structure.

Up close, that slide looks awfully high, and your little one is so…little. Clearly, you cannot possibly send her down the slide all alone. You’re a responsible parent! You’ll hold her on your lap, at least the first few times. Until she’s had a chance to get her bearings.
You climb up, set your child on your lap, and down you go — except that your toddler’s leg is stuck between you and the slide, and — that sound!

Almost 14 percent of tibia fractures — that’s the larger and stronger of the two bones in the leg below the knee — in toddlers ages 14 to 32 months were sustained while sliding down a slide on an adult’s lap, according to a recent study in the Journal of Pediatric Orthopaedics.

Injuries typically happened when the leg of a young child sliding in an adult’s lap became fixed, while both the adult and child continued moving down the slide, or when the child’s leg became twisted, creating a torque that led to a fracture in the lower extremity, explains study author John T. Gaffney, DO, an orthopaedic surgeon specializing in pediatrics in New York.
And every single fracture happened when toddlers were sliding in the lap of an adult or an older sibling. “Although going down the slide with a child on your lap may seem like an enjoyable moment for both of you, you may be putting your child in danger,” says Dr. Gaffney.

Either let your toddler go down the slide on her own, or don’t let her go down it at all.

Has your child ever been injured on the playground? Sound off in the comments!

For more on keeping kids safe: