Before I had kids, I was so smug. I was sure I’d be such an excellent parent that my children would never argue. They just wouldn’t. They might have disagreements, but they would never, ever bicker or argue. I can hear you laughing; I am, too! 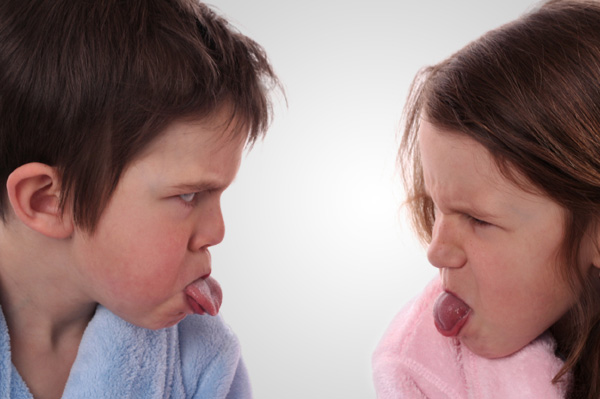 My plan failed to take into account human nature, and specifically the human nature of kids. Oh my goodness, do my kids bicker and argue. It’s so annoying. They are capable of such love and warmth
— and of arguing over who breathed that last air molecule. Most of the time I just want them to stop and I try to think of ways to get them to solve their own issues. Sometimes, though, one is
clearly right and the other clearly wrong and I struggle with how to handle that.

It might seem obvious: I tell one he is right and the other he is wrong. But it’s not that simple. In our house, discipline has always been an individual issue and not for the siblings to be
included. We make an effort not to deal with disciplinary issues of one child in front of the other children; it just doesn’t feel fair. Given the nature of sibling rivalry, we don’t want to give any one child any additional ammunition against the others.

But every once in a while, I feel like one of the kids needs to feel what it is like to have his or her parents stick up for them, to be on their side. While we, really, do this most of the time
when dealing with the outside world, it’s a very difficult thing to do it in the home. But sometimes I just get the sense that one of them needs it. They need to know they are right in a situation,
and their siblings need to know they are wrong in the situation.

When I do this, though, is tricky. It has to be something fairly small, and insignificant in the scheme of things — the last thing I want is for one of the kids to think one relationship is of
more value than another. As such it can’t be over school or friends or family relationships. It’s usually over something at the dinner table, or a toy, or a baseball statistic, or something really
small. Something inconsequential.

It also has to be balanced out. If you do it for one, you need to do it for the other relatively soon. Maybe I’m too sensitive to the issue of favoritism (it was a big issue in my house growing up, one always accusing one of the others of being the “favorite”), but I want each of my kids
to know that I am on their side, both individually and as a group.

No sides at all

Most of the time, however, I try not to take sides in their arguments at all. Aside from just telling them to stop it, already, I often ask both sides if they are treating their sibling like they
want to be treated and suggest ways to find compromise. Sometimes, though, I just plain have to separate them – and offer a little individual discipline.

Taking sides in your kids’ disagreements with one another is a tricky business, admittedly. Because I do want my kids to each feel like I’m on their side at various times, there’s some risk that
I’ve chosen to take. If I can’t actually have my pre-parenthood daydream of no disagreements at all, I’m okay with that.

Tell us: How do you deal with fighting siblings? Comment below!

For more tips on dealing with squabbling siblings: