It’s a time-honored grandparent tradition. Ply the little ones with sweets while they laze about during visits to your house. Allowing them to form these kinds of habits, though, does little to steer them on a path to long-term health. 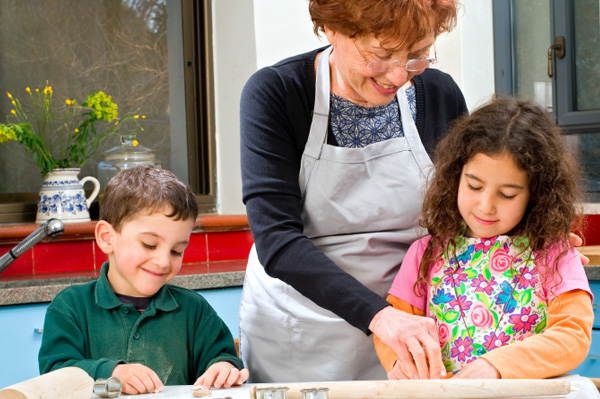 ‘We live in an age when kids are likely to have way too much to eat rather than too little,’ says David Katz, M.D., associate professor at the Yale School of Public Health. ‘So, the threat of
childhood obesity is much more likely to be stalking your grandchildren than not.’

The numbers don’t lie: The Centers for Disease Control reports that 15 percent of American children are already overweight. What’s more, most children in the nation get less than
one hour of exercise a day.

Now for the good news: A recent study in the American Journal of Public Health found that kindergarteners’ and first graders’ body mass index rises less quickly in
school-year months compared with summer months. So, now’s the time to help your grandkids form these 10 healthier habits. Hint: It may be easier — and more fun — than you imagine.

1. Bring in the Kiddie Cooks

Studies have shown that the more a child is exposed to a food, the more likely it is that he or she will develop a preference for it. Plus, ‘children will be bolder about trying new foods that they
have helped prepare,’ says Katz.

So, invite your grandchildren into the kitchen with you. Tie colorful aprons around them, and maybe even fasten tall chefs’ hats to their hair. They’ll like stirring the soup and getting their
hands dirty making the hamburger patties. And, there’s no better time than when you’re cooking and baking together to slip in a few tidbits about nutrition and explain to them how simple it can be
to make favorite recipes healthier — by using less oil or substituting semi-sweet chocolate for milk chocolate in cookie batter.

3. Switch Off the Telly

Watching TV is associated with weight gain in kids, according to a recent study in the Journal of the American Dietetic Association. Still, ‘many grandparents get nervous that their
grandkids won’t have anything to do when they visit,’ says Bartell. ‘They use the television as a comfort.’ She suggests planning activities in advance to avoid falling back on the boob tube for
entertainment support. ‘Trips to a local park, a bowling outing, even running errands to the grocery will keep kids active and away from the TV.’

Hint: Prepare for rainy days by bulking up on or updating your supply of board games. And, keep a running list of impromptu indoor games. Think: hide-and-seek — an ideal way to
rally the crew for on-the-fly fun when downpours strike.

Don’t just encourage your grandkids to play games outside; jump in and join the fun. Suggest an after-dinner walk. Or, go for something more adventurous, such as bike riding or swimming. ‘You don’t
have to do laps, just get in the pool and let your grandkids play around you,’ says Mary Ellen Renna, M.D., a pediatrician and physician nutrition specialist. Getting involved hits home the message
that fitness in the summer — be it kickball, softball, or volleyball — is a blast.

Kids will always clamor for fast food, but you can use restaurant meals to teach them about better-for-you menu options. Veer them away from the kids menu, where ‘everything is fried,’ says
Bartell. ‘Suggest eggs or chicken or a hamburger instead.’ Show them through your own food choices, too. Studies have shown that children learn to prefer foods they see adults eat often. Says
Renna: ‘Make sure you, as a grandparent, are eating healthy.’ Explain to your grandkids that the salad has less fat and fewer calories than the cream-based soup, and that whole wheat toast has
more fiber than white.

Trick: Invent a game in which your grandkids pick three healthy menu items, and get gold stars.

Next page: 5 more healthy habits for your grandkids…