Laundry is one of those never ending tasks. No sooner do you get it all done, folded and put away do you have to do it all over again. The washer and dryer are in near constant use at our house, and I don’t see any way out of that. So I accept it – and sort and fill and switch and fold. It’s something that just is. 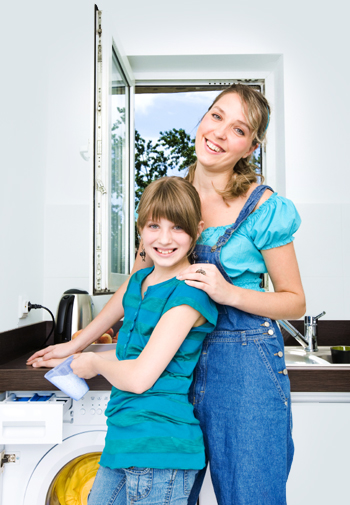 A few months ago, each of my sons became upset with me because they each claimed to need something that was still in the laundry, and why hadn’t I done it already? Upon responding that I was their mother, not their servant, and they could have let me know they needed something before the very last minute, I also found myself saying that they could just do their laundry themselves.

And you know what? They can.

My sons, at 9 and 13, have been helping me with laundry sorting tasks for some time. They divide out colors and whites and heavies as part of regular family cleanups and match socks after big laundry days, but until now they didn’t do their own laundry themselves. They are certainly old enough to handle the task.

Certainly my older son could have started sooner; my younger son probably is just the right age to start. Given they both have increasing preferences for what they wear and the frequency with which they wear those preferred items of clothing, taking responsibility for getting those items clean is absolutely appropriate. And since putting detergent in the washing machine, twisting a knob and pressing a button isn’t rocket science, the tutorial is fast and easy.

Getting the boys into this routine had a few bumps. There were a few days early on when they realized they’d forgotten to do laundry and tried to leave the house with clearly dirty clothing. I wouldn’t allow that, so they had to wear their less favorite clothes more in the first weeks of being responsible for their own laundry. (And they realized that if they were wearing these lesser favorite clothes more often than they would have if they’d just kept their mouths shut and not criticized my laundry activity!)

No more complaints – and plenty of benefits

From here on out, there should be no more complaints about laundry not being done. I’ll certainly throw something of theirs in with the rest of the laundry if I am doing some anyway, but it’s their responsibility now.

As I do the rest of the family laundry, I notice it goes faster. It’s three loads instead of five, and it feels more manageable. And no more dealing with eau de teenage boy as I sort through the laundry! While I still don’t call doing the laundry enjoyable, it’s more reasonable than it’s been in a long time, and the kids are getting a better sense of what it means to run a household.

Tell us: What age did your kids start doing their own laundry? Comment below!

More tips on kids and housework

2 hrs ago
by Amanda Hambrick Ashcraft

19 hrs ago
by Sabrina Rojas Weiss