We’d love it if our kids would do only what we tell them to do, but the reality is that they’re much more likely to do what we do. And when it comes to driving, a new study shows we’re not setting a good example. Is your behavior upping your teen driver’s risk of an accident? 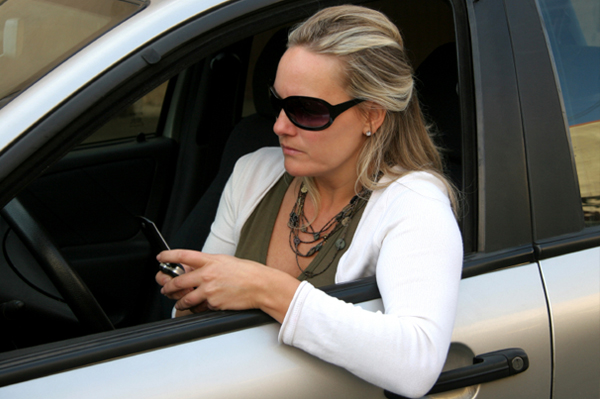 You load the kids in the minivan and pull out of the driveway. As you set off down the street, you load up the DVD to occupy the toddler, take a call from your spouse and find out the soccer game has been moved to a different field. You don’t know how to get there, so you plug the address into your GPS. Just another day — just another parent driving while distracted.

In fact, you’re so distracted, you probably don’t even notice that your teenager (and your toddler, for that matter) is watching what you’re doing and learning that this is how people drive: while multitasking.

Liberty Mutual Insurance surveyed parents and released some disturbing numbers this summer. Just under 70 percent of parents of teen drivers — and a full 75 percent of fathers of teens — report practicing at least two dangerous or distracting behaviors while driving, and nearly half (49 percent) do at least three.

From the time kids are small — think back to your toddler watching his DVD — they absorb everything we do. “And if they grow up watching their Mom or Dad speed, talk on their cell phone, text and email, or pay more attention to what’s on the radio than their driving, they are going to think it’s okay to do the same thing,” says Dave Melton, a driving safety expert with the Liberty Mutual Research Institute for Safety.
A small number of parents even admit to reading email or posting Facebook updates while driving — definitely not behavior anyone should be engaging in behind the wheel.

Fortunately, it’s never too late to make a change — you can start right now, by sitting down with your teen driver and talking about safe driving habits. Establish rules, and ask your teen to help you police yourself. Make it clear that it’s not just about talk on your part — commit to your own safety and that of your kids.

And even if you’ve discussed driving safety rules in the past, it’s not a once and done conversation. “Learning the rules of the road isn’t like learning how to throw a baseball or ride a bike, where parents can teach the basic skills and leave their children to further develop the technique,” says Stephen Wallace, Students Against Destructive Decisions (SADD) Chairman and CEO. “Safe driving goes beyond learning a skill set. It’s a two way street, and requires daily precautions and parental enforcement with clear rewards and consequences.”

Many parents do take some precautions with their teen drivers. Over 80 percent of moms and dads set curfews for nighttime drivers. Whether or not your state sets such laws, it’s a good idea to establish a curfew for our own young driver. You can also join the 80 percent of parents who don’t let teens use cell phones or other electronic communication devices while driving. But remember: if they see you do it, they’ll think it’s okay.

Around 60 percent of parents also limit the distance they’ll allow their kids to drive. It’s important to note, however, that accidents can happen close to home, so proximity doesn’t necessarily translate to increased safety.
Whatever rules you decide to set, be sure to enforce them, and follow through with consequences when necessary. Most importantly, let your kids see you following your own rules. Don’t let distractions keep you from being a safe driver.

Really: Don’t text while you drive

If you want more reasons for not texting while driving, check out this video.

For more on kids and driving: