Don’t you love waiting to see what the oh-so creative minds of celebrities come up with in terms of baby names? After all, famous folks are often people who enjoy — or have at least come to enjoy, either by will or by force — the spotlight. And more often than not, they’re also creative types, and they understand the value of appearing unique in a crowd. What do you get when you combine all those traits, you ask? Well, definitely some fascinating fashion choices — plus a lot of really, really weird celebrity baby names.

Not all celebrities take the out-there approach, though: Anne Hathaway named her baby Jonathan, for example. And some stars opt for unique but not quite head-turning options, like Busy Philipps’ daughter Birdie. But then there’s the category of stars who go all in and come up with names for their kids that much of the general public might consider downright, um, bizarre.

Guys. Sorry to break it to you, but despite this whopping moniker (rumored to be the name of the soon-to-be spawn of Elon Musk and Grimes) trending on Twitter right now, all signs point to this rumor being a fake. Not that we’d honestly even be too surprised? After all, real-life pandemic baby names — from twins Covid and Corona to the latest baby, Sanitiser — seem to be all the rage right now. It’s a weird, weird time, y’all.

Although it’s not the (arguably even weirder) name, Raddix Maddox, that our nearsighted eyes first imagined it was, Cameron Diaz and Benji Madden’s daughter’s name is still pretty out-there. So much so that certain Twitter users compared it to the name of a vaccination — or a hotel chain.

Quite the tongue-twister. But luckily, this little girl is the daughter of rapper T.I., so she can probably handle it.

We love Henry, but may the force be with the newest member of the Duggar-Seewald clan if any of his classmates ever find out his middle name. Hey, at least his first name isn’t Spurgeon; that’s his older brother.

No, it’s not what Shannyn Sossamon majored in while at college; it’s what she chose to name her baby.

Doutzen Kroes and her husband, DJ Sunnery James, have a son named Phyllon Gorré, which sounds a little bit more like a character on Star Trek than a little boy who roams Earth.

Jessica Simpson’s little boy is adorable, and the name Ace is pretty cute — but there’s just something about that Ace-Knute combo that sounds like a supervillain.

What else would you expect from the passionate Hunger Games star Jena Malone? Malone welcomed her son with her boyfriend, photographer Ethan DeLorenzo, in 2016 and named the little guy Ode Mountain DeLorenzo Malone. Malone hasn’t revealed the inspiration for her son’s name yet, though we think it makes a great “ode” to nature.

Ashlee Simpson and her ex-husband, Pete Wentz, raised some eyebrows when they named their son Bronx Mowgli. Wentz wouldn’t say much about his affinity for the NYC borough, but he did say that Mowgli came from The Jungle Book (obv).

“The Jungle Book was something that me and Ashlee bonded over. It’s a cool name,” he said. Well then.

The name of Ashlee Simpson’s next son — with current husband Evan Ross — would follow suit. The couple welcomed their daughter in 2015 and gifted her with a very unique name that nodded to her musical roots (she’s Diana Ross’ granddaughter, after all): Jagger Snow.

Avatar star Sam Worthington’s baby name choice for his first child with wife Lara Bingle Worthington came out of left field. In 2015, the couple named their baby boy Rocket Zot — just because they liked the way it sounded. Rocket was a fun first name the Worthingtons chose at random, and Zot was Bingle Worthington’s late father’s nickname.

Holly Madison of The Girls Next Door is known for her glitz and glamour, and she used the same panache when naming her baby girl in 2013. As Madison tells it, adorable little Rainbow Aurora was named after a girl Madison knew (and was jealous of) in school. Despite what the haters had to say, Madison stood behind her daughter’s ultra-unique name choice.

Everyone initially thought it was a joke when Kim Kardashian West and Kanye West named their daughter North West. But as it turns out, both Pharrell and Vogue‘s Anna Wintour encouraged the name.

“It was a rumor in the press, and we’d never really considered it seriously at all, but Kanye and I were having lunch right over there at that table about a year ago, and Pharrell [Williams] came over to us and said, ‘Oh my God, are you guys really going to call your daughter North? That is the best name.’ I said, ‘No, we’re not. That’s just a rumor,'” she told GQ. “Then a little while later, Anna Wintour came over and asked the same thing. She told us, ‘North is a genius name.’ Kanye and I looked at one another and just laughed. I guess at that point it sort of stuck.”

Kimye continued their baby name winning streak when they introduced their second son, named Saint West (not Easton West, as the internet had rumored it to be) in December of 2015. In January of 2018, the couple had a baby via surrogate, giving the newest bundle of joy the name Chicago West. 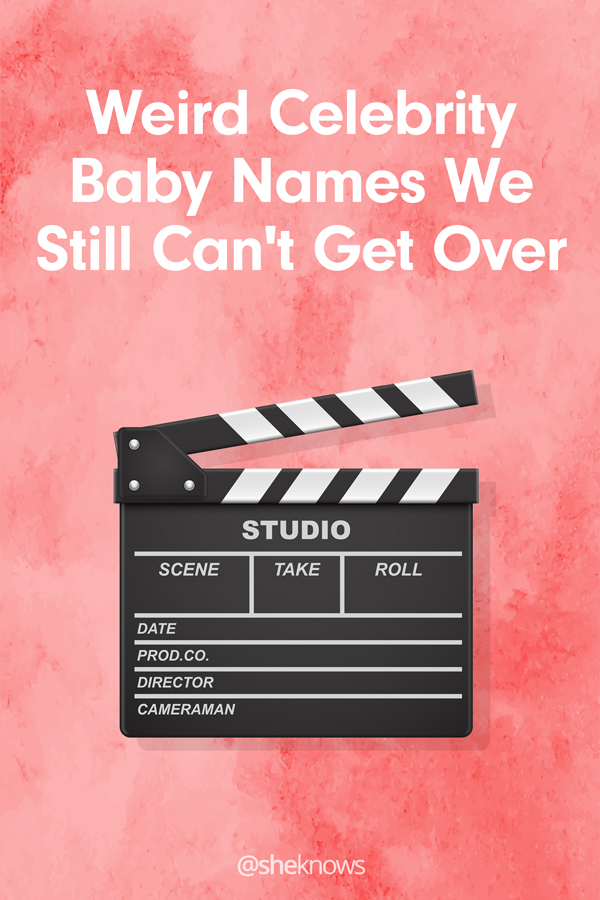 A version of this article was originally published in August 2009.

For even more famous names — some stranger than others — check out this list of our favorite celebrity baby names.