Should kids have cell phones? Families have always dealt with the perils of having several kids in different activities and the necessary communication that comes along with that — such as when and where to pick up. But these days, cell phones can make organizing day-to-day life easier. That said, are cell phones for kids a good idea? 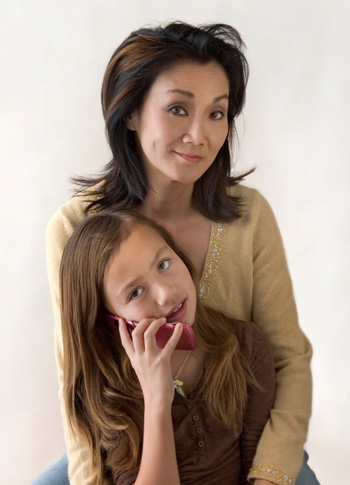 Just a decade ago, keeping track of your children meant talking about where they were going, with whom, and when they would return. But parents today have a new tactic for keeping tabs on their kids: Cell phones.

Embracing the technology is working for some families, particularly those who set clear guidelines and expectations for the phones. But other families say that phones just aren’t a need when it comes to keeping track of their kids.

Is there a right age?

For some kids, taking care of the phone and making sure it’s secure are natural. But for others, that level of responsibility won’t come until they are a little older. Mom Meryl Evans says that, while her daughter was ready for the responsibility when she was entering the fifth grade, her son, who will be a fifth grader this year, is not. “His first brand-new iPod lasted only a month because he left it in his pants pocket. Yep, the iPod took a bath and never recovered. It showed us he was not ready for the responsibility,” says Meryl.

While many parents are embracing cell phones to keep their families connected, some parents aren’t. Mom Jessica Gottlieb, who blogs at JessicaGottlieb.com, says that, although she did purchase a phone for her daughter, she realized the device just wasn’t a need when her daughter lost it. “She was about seven, and when she lost it, I realized she was just fine without it and that it was a useless tool in her hands. She was my first child, and it was my first experience with childcare outside my immediate family. We were all just feeling our way through things,” says Jessica. “I like the kids not having phones. I like them being aware of where they are and learning to interact with the world. Even though I’m in Los Angeles, this is a pretty cozy neighborhood, and the kids could ask just about any storekeeper to please call home.”

For parents who do allow their children to have cell phones, they can turn out to be an unexpected source of comfort. That was the case for mom Monique Jordan, whose 11-year-old daughter has a cell phone. “I was completely against her having one, but I found that it actually gave me comfort knowing I could reach her. It is such a fine line of wanting her to be 100 percent safe but knowing I need to slowly start to give her more freedom as she is growing up. This has turned out to be a big help in that process,” says Monique.

Keeping tabs the other way

While cell phones may be a convenient way of keeping track of kids, some parents point out that it is hardly the only way to do so. After all, parents kept track of kids long before cell phones came into the picture. “I keep tabs on my kids by being there. If I’m not with them, I know where they are, or the general route they’ve taken. My daughter is 10, and she can walk around our neighborhood. If I don’t see her out the window, I have friends on every block whom I can call, or I can hop in my car and find her,” says Jessica.

Mom Katherine Cobb agrees. Her 12-year-old son is pretty much the only one in his peer group without a cell phone, and she likes it that way. “My 12-year-old calls up friends to play, and then they go to the nearby park or out to our backyard or to the local pool. We agree on where he’s going, who he is going with and what time he will return,” explains Katherine. “I think the world has gotten a little crazy about keeping tabs on our kids (which parents cite as the reason they are getting the cell phones for them in the first place, not that I believe that), when a little responsibility and accountability is what kids need for their own development.”

The reasons for getting kids cell phones vary widely. For some families, having many activities and busy family lives make cell phones a necessity for all. For others, having two parents living in different places means cell phones make sense.

In Meryl’s case, there was also a truly practical reason for getting a cell phone for her daughter. Meryl is deaf and thus cannot be contacted via normal phones. Since most schools aren’t equipped with a phone that can send text communications, the cell phone gave Meryl’s daughter a way of contacting her in an emergency or if afterschool plans changed suddenly. “Her plans changed at the last minute many times, so she was able to update me. For example, an after-school meeting gets canceled — and I can pick her up. Otherwise, she would be stuck waiting,” says Meryl.

As with any privilege, having a cell phone comes with rules, say many parents. Schools may have policies about where and when kids can have cell phones. Likewise, rules are necessary at home. Raffi Darrow says that, overall, her two daughters have been pretty good about following the family rules for cell phone usage, which include no downloading, no using the phone during dinner and calling only between 9 a.m. and 9 p.m. “The kids have been great about following the rules – except for one. They turn their cell phones off all the time because they are afraid the battery will die. But the problem with that is then I can’t reach them. During the school day, they are required to have the phones off and in their lockers — school rule. And I think that has become a habit. They turn the phones on when they need to use them. But over the summer, when they are out and about, I like to be able to reach them,” says Raffi.

Tell us: When will you let your kids have a cell phone? Comment below!

For more on kids and cell phones:

Baby Names Beginning With ‘K’ for Your Kindhearted Kid