When was the last time the items in the mail box put a smile on your face? When was the last time you held a real, handwritten letter in your hand? Not a dashed off note, a signed greeting card, or even a thank you of some kind, but an honest-to-goodness letter? It’s been so long for me, I think we might even be talking years. I would love to get a real letter in the mail, truly. But to get that kind of mail again, the kind of mail that makes opening the mailbox a thrill, I need to create some of that mail, too. 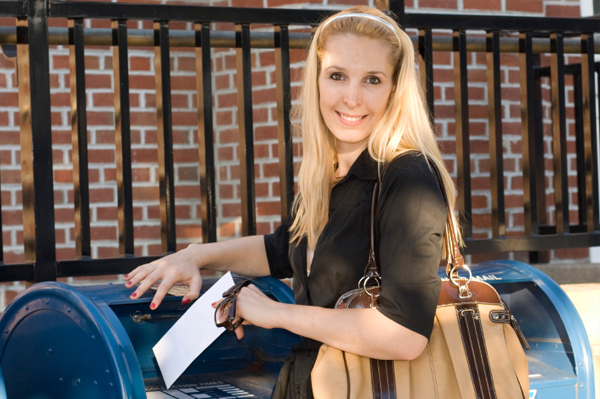 There’s something different about a real letter. A real letter you can unfold and reread over and over again. There’s a warmth to the paper that you can’t get from email; a real person touched that
paper while only servers touched that email. And would you ever curl up with your computer to savor the 12 point Arial type?

I used to be a letter-writer. I wrote to my grandmother, and wrote to my father weekly in the last few months of his life. One college friend and I communicated mostly by letter for several years.
It was really nice. Our schedules didn’t quite mesh for regular phone calls (this was before cell phones for the masses, mind you), and although email had been invented, it wasn’t in homes yet.
Yes, I am talking about the dark ages. That college friend and I, once email came around, dropped that lovely habit. Now we’re on Facebook together and it’s great to have the regular, in the moment
updates- but it’s just not the same.

First things first, identify a person to whom to write. For me this is relatively easy – a relative. To be specific, my mother’s first cousin whom neither of us met until about ten years ago. This
dear woman took me under her wing when I lived near her for a short time, loving me as if I was much closer kin. We write a couple of times a year, but I really should make it more often. I miss
her.

Now, who can you write to?

While a letter on notebook paper is just fine, a letter can be so much more if you get some simple stationery. It doesn’t have to be fancy. It does have to allow you space to say something – though
you never have to use all the space.

Don’t forget stamps, of course. For this letter, why not pick out a stamp that’s more fun than the book you can get at the checkout at the grocery store. The post office puts out lots of great
stamps each year. Go in and ask to see what they have. Pick something out that you think your letter recipient would like.

Next get a good pen. Choose a pen that has a comfortable feel in your hand. Try to keep the ink color to dark blue or black, however, especially if your recipient is older. Pink is fun, but hard on
the eyes.

Find – or schedule – a time and some space to write your letter. No TV or computer to distract you. It could be late at night or early in the morning, but make a little time to get in your own
head.

Now, the hardest part: starting. What to write on that blank piece of paper? Admittedly it can feel a little intimidating at first, but think about what you would say to that person if she or he
were sitting right next to you. Would you tell them about the funny thing your son said today or how the peonies by the back door make you smile when you come in the door? Was there something
specific that reminded you of that person? Think about your letter as part of a conversation, and just jump in.

Finally, don’t forget to actually mail the letter straight away. Put the flag up on your mail box like you may not have done in a long time. Writing a letter is good for the soul – yours and the
recipients. I bet you’ll be smiling the whole time.