Are mean girl cliques making your daughter’s life miserable? Dealing with these bullying cliques almost seems like a rite of passage for today’s pre-teen girls. In fact, there was even a movie, Mean Girls starring Lindsay Lohan, that dealt with this exact subject. In order to help your daughter navigate this difficult time, we have searched out advice from parents, experts and even former mean girls to find out how girls can stand up to bullying cliques. 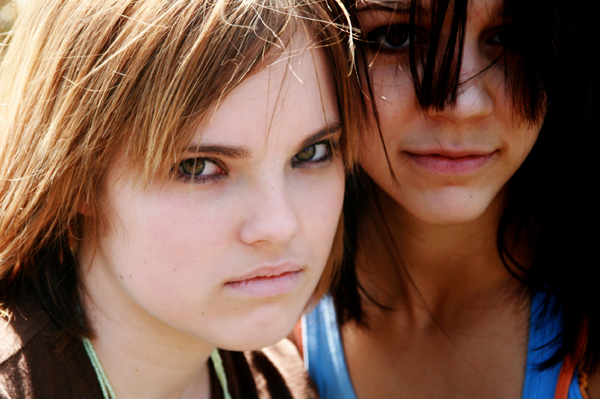 Many tween and teen girls are struggling with mean girl cliques who pressure them into doing certain things and ostracize or bully them if they don’t go along with it. How can you teach your child to stick to her guns, hold her head up high and get through this trying time?

Get support from teachers

Kathy (whose name has been changed to protect her daughters’ privacy), a Midwest mom whose 11-year-old daughter was recently the target of a mean girl clique and school bully, knew something was wrong when her daughter came home after the first day of school blinking back tears.

“Peers sent the message the first day that she was not going to be part of the “in” group, followed by an ensuing whispering campaign of insults decreed by the “queen bee” of the class who carried a lot of influence with the rest of the grade to judge who was and wasn’t popular,” says Kathy who says to this day her daughter has never been able to uncover what her “offense” was or exactly why she was targeted. “But the bullying certainly became unbearable when the “mean girls” swept her entire lunch onto the floor and got the desired effect as she was reprimanded and made to clean it up. “

Kathy decided it was time to enlist the help of her daughter’s teacher who took the opportunity to talk to the entire class about treating each other with more respect without identifying her daughter and pledged to follow-up if it didn’t stop within a matter of weeks. Kathy believes the teacher’s general confrontation to her daughter’s class was a good first step in stemming the mean girls’ bullying power.

“As a parent, I would stress trying to partner with a teacher. While you can’t expect the school to punish behavior that is typically hidden, most teachers are very aware of bullying and mean girl behavior and may have ways to intervene without drawing attention to the specific student being victimized,” says Kathy.

Getting involved in extracurricular activities is another way teens can build up confidence and meet new friends. Kathy feels that this, along with teacher involvement, helped turn the corner.

Her daughter had the opportunity to showcase her unique talents during a solo performance in the choir and it imbued her with confidence filling her with a sense of strength that likely deflated the rumors that had been circulating. “Supporting kids to pursue interests and develop their talents in other settings can definitely help give their confidence a lift. It’s hard to accept that as parents we can’t fix the problem directly, but there is a lot we can do to help our kids regain their confidence by listening and helping them find constructive solutions.”

4 steps to Empower your daughter

According to Silvana Clark, co- author with her own daughter Sondra Clark of 12 Going on 29: Surviving Your Daughter’s Tween Years (Praeger Publishing) who surveyed 400 tween girls who admitted they’d been bullied, most felt that the best way to counteract it was to ignore the bully and walk away. While, Clark admits that it may be hard to put that in place, here are four ways parents can help their daughters deal with bullying:

Set up some role playing situations

Parents can make a threatening comment to their daughter. Then have their child try different ways of responding. Sometimes a simple “I won’t listen to you talk to me that way” does wonders. The key is for the tween to talk and walk assertively. That’s why role playing is great. A tween might be scared to stand up to a bully, but if they can pretend to be assertive, the bully usually retreats.

If their daughter is into tap dancing, parents should invite a few girls from dance class over to strengthen those relationships. It will be easier for her to ignore a bully who says her hair looks stupid if she has a group of friends who think her hair is cute.

“Document” what the bully does in a special notebook

Parents can have their daughter write down what she did in this notebook every time the bully is mean to her. Parents should review the book on a regular basis. If the bully gives their daughter a dirty look on the bus, while that’s not nice it certainly isn’t bullying and a parent will have to instruct their daughter to learn to ignore the dirty look. However, if their daughter writes down that the bully pushed her at recess and knocked books off her desk, it might be time for the parent to step in.

“I know one mom who confronted a bully at her daughter’s bus stop. She simply walked up to the girl, made eye contact and calmly and firmly said, ‘It seems you have been saying mean things about Jessica. Please stop right now. You don’t have to be friends but you don’t have the right to say mean and hurtful things. Thank you.’ Then the mom walked off and Jessica never bothered the girl again,” says Clark who admitted that while it doesn’t always work, it’s worth a try.

“While another mother spent six months dealing with her daughter’s bully. They tried everything, including meeting both the bully’s parents, teachers and principals,” Clark says. “Her daughter was still tormented. they even had the police go to the bully’s house. They finally switched schools and her daughter became a new child with self confidence and a positive attitude. Unfortunate but true.”

Next Page: A former Mean Girl shares her advice >>