Now that I’m a mom, I’ve become a freak about food sanitation and personal hygiene — especially hand washing. Children are pint-sized Typhoid Marys, and hand washing is front line defense against most germs. Unfortunately, my purse hygiene would constitute a Code Red by the health department. 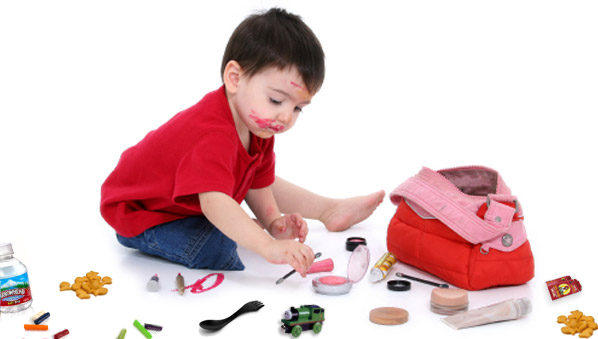 I don’t carry a dead ferret in my purse, unlike the woman in one of my previous articles, but I think the puddle of fermented apple juice, pirate booty, graham crackers and Altoids and God-knows-what-else at the bottom would cause even the most street-hardened purse snatcher on crack to recoil in horror.

Yesterday, I was taking a taekwondo class and my hairband (as usual) exploded on the mat and zinged across the class, nearly taking out a classmate’s eye. I excused myself and ducked out to find a spare in my purse. I plunged my hand into something sticky and gritty at the bottom of my purse and sighed. This was becoming an all-too-familiar scenario.

I finally found another hairband, but it was absolutely encrusted with graham cracker crumbs, which in turn were sodden with Purell (which had spilled in my purse). I reasoned that the Purell probably killed whatever nasty bacteria would be lurking on the hairband, and brushed it off the best I could and tied my hair up. But I vowed to finally clean out my purse when I got home.

In retrospect, I should’ve donned latex gloves, but I guess I was unprepared for how bad it was going to be. And it was pretty bad.

Here’s an inventory of the crap I found in my purse — and I was alarmed at how 90 percent of the contents were expired food items.

And creating a foundation at the bottom were a fossilized collection of cheerios, goldfish, pirate booty, pretzels, melted string cheese packets and other unidentifiable food items. I guess that explains the empty sandwich bags.

If I had a personal theme song, it would be the one from “Sanford and Son.” I totally disgust myself.

Gunky – and germy, too

I remember a news story about how shockingly germy the outside of most women’s purses were when swabbed and tested in a laboratory. There was e.coli and even hepatitis detected on the purses. (Get the oogy details here.)

Yet, I wonder if there’s ever been a study done on the biohazard lurking on the inside of an average mom’s purse. I’d be afraid to take a culture of the petrie dish that I call a purse. There could possibly be new strains of penicillin or some new life form emerging from the primordial soup of pirate booty and Purell. But more realistically, handling the contents of my purse will probably just give you a very bad rash.

The most depressing epiphany was the realization that there wasn’t a single useful thing inside aside from my wallet and makeup bag and cell phone. I was creating a premature dowager’s hump on my back, carrying a heavy, overstuffed receptacle of toddler detritus.

Now that my purse has been somewhat decontaminated, I feel a sense of relief. If any of my intrepid readers have been inspired enough by my post to tackle the contents of their own purse, please post your most shocking and disgusting discoveries here. I’d love to feel less alone in my handbag squalor.

So — spill: What’s in your purse? Post about it in the comments below!

7 hrs ago
by Cristina Velocci