Nearly 1 million cribs manufactured by crib maker Delta have been recalled due to safety hazards in the wake of at least one infant death. The cribs have faulty drop sides that can entrap a child’s head. Is your crib affected? Read on. 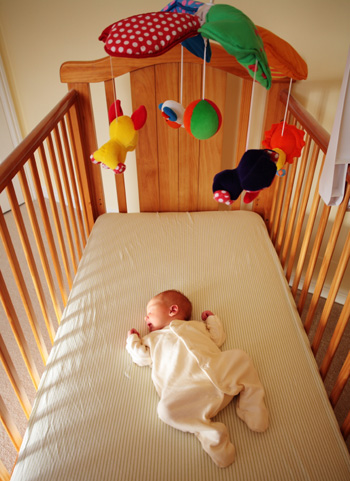 When you purchase a crib, you expect it to be safe for your child whether it’s the bargain model or the oops-there-goes-my-whole-paycheck model. But for the owners of 985,000 units of Delta cribs, that expectation came to a crashing halt this week.

The crib apparently has a faulty safety peg system — something that parents weren’t warned to watch out for before this. The pegs can become lost or broken, leaving the crib unsafe for baby.

Here’s the information you need to know:

Is my unit recalled?

The affected units were sold at major retailers including Wal-Mart and Target for about $100. They were made between January 1995 and September 2007. To see if your unit is impacted, first check on the mattress board of your crib. You’ll need the date of manufacturer, the model number and the country that it was made in.

Then, check out Crib Recall Center to see if yours is included in the recall.

Mine was recalled, what now?

If your crib was recalled, then you need to immediately order the recall kit. If you already have the information listed above, then all you’ll need to do is fill out a simple online form and the repair kit will be mailed to you. Delta and the U.S. Consumer Product Safety Commission recommend not using the crib until you have the kit installed, particularly if one of the safety pegs is missing.

I am always outraged when I hear about recalls — particularly on products intended for babies. We, as consumers, have a reasonable expectation that the products we purchase for our children (and our pets, and our selves) should be safe and free from harmful chemicals or agents. Yet, we are continuously shown that we cannot trust the companies that are making cribs, car seats, even food.

Perhaps because my daughter’s crib is among those recalled, I am hypersensitive to this particular recall. When I heard about the massive recall, I had a feeling that hers would be impacted. The crib was one that my son had used at my mother’s house when he was a baby. When my daughter was born, my mother gave it to us.

The company and the USCPSC are saying that people shouldn’t use their cribs until the repair kit is installed. That makes sense. But how long will it be before the repair kit arrives? Days? Weeks? And what are families to do in the meantime?

That’s the part I have a problem with. Parents are left to find a safe alternative sleeping arrangement for a child who counts their age in months. Regular beds are out of the question (after all, there is a reason that the child sleeps in a crib). Playards could be an alternative, if the family has one — not everyone does.

However, I wouldn’t want my child sleeping in a playard for weeks and weeks. Delta has given no indication — in press releases or in the multiple emails I traded with them — about how long it will take for this kit to arrive.

I am outraged that someone somewhere thought “Let’s recall almost 1 million cribs, and let’s leave these children without a place to sleep until we send out these handy dandy kits.” Perhaps it’s even more of an outrage if the kits are ready to ship, because that means that the company knew and waited to do anything until they were ready to respond, thereby leaving 1 million children in danger.

As a mom, I am sick and tired of the recalls, the lead paint, the faulty safety systems. I expect more when I or anyone purchases something. This is about the safety of children – babies – and that should be the highest priority for these companies. But it’s become increasingly clear in recent years that companies like Delta farm out their manufacturing work to countries with inexpensive labor so that they can make more money.

What’s more is that this isn’t the first recall for Delta. A few years ago, cribs made by this company were recalled due to lead paint on the furniture. Apparently nothing was learned from that.

The bottom line in all of this is that parents need to be hyper-aware of the quality and safety of the items they purchase for their children. Safety items like cribs and car seats cannot be purchases based on pricepoint or looks alone. Take the time and make sure the item is truly safe — simply being sold doesn’t equate safety anymore.

For more safety information for cribs, check out Choosing a Safe Crib on Pregnancy and Baby.

This article was posted in October 2008