Back when you were in school, it wasn’t too complicated to make new friends. After all, you were forced to sit through the same classes day in and day out. Sometimes, all it took was the sharing of some Crayolas and the ubiquitious “Will you be my friend?” But as you get older, making friends gets a lot more challenging. Gone are the days of having an adult help you break the ice (what, you think you shared those crayons on your own?). You’re the adult now. And it’s time to start making some friends with your child’s classmates. 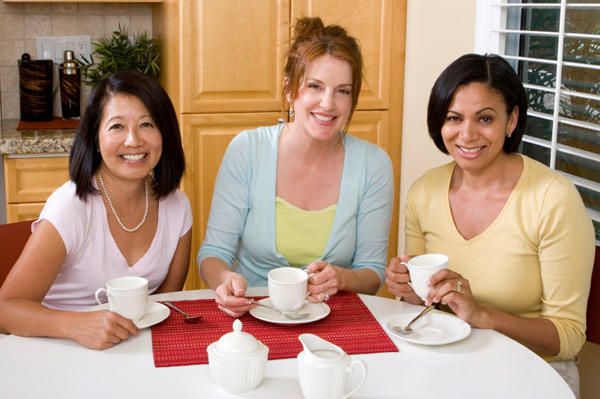 Whether you are super-shy, overwhelmed, lacking sleep, or anything else, you probably appreciate having friends. There is camaraderie, and a helping hand, when you have friends in similar life stages. And chances are there is at least one other parents in your child’s class who could be that confidant. You just have to let it happen. Are you ready?

You might be a crazy and fun person outside of your child’s school but the second you come in contact with anyone from there you clam up and become the restrained, quiet type. Or maybe you are the quiet type, but become loud and borderline obnoxious at the sight of another mom. Whatever your safety personality is, drop it. You will find more friends (and hang onto them) if you just be whomever it is that you are.

That’s what works for the writer behind the blog Melissa * Laughing. “I’m the mom who stands in the back of the room at parties, either physically or mentally texting people not in the room, not eager to mee the other parents. It takes me time to warm up to new people, especially when I already have a full family-work-friend life. But still, now and then, I meet a mom who is also standing in the back of the room. We admire each other’s shoes, exchange business cards, and warm up slowly over the school year,” she said.

Dust off the old friend-making muscles

Some moms say that making friends is making friends, whether you are 6 or 36. It’s simply a matter of finding common ground and connecting (when I was my son’s age, this was done over a few Barbie dolls and a juice box).

That worked for Gayle Kesten of Extr@ Mile Editorial when her son ran into a friend at the playground and parents got to talking. “Making friends with your children’s classmates’ parents requires more effort, but the foundations for a genuine relationship are really the same as when we were kids. You have to have common interests, and they also have to extend beyond the kids,” Kesten said.”[I]nterestingly, my close mom friends are the ones I met when my son was in kindergarten. After his first day of school, my son came home talking about a particular classmate, who also went home talking about my son. Wouldn’t you know it—the boys saw each other at the playground soon after and that’s how the parents met. Conversation flowed and we discovered we had so much in common. On our first playdate to their house, I walked in and started pointing to all the chachkas my friend had that I also had.”

Involved parents — the ones who volunteer in classrooms and chaperone trips — have the advantage of having common ground with many other parents in their kids’ class since they have conversation-fodder that impacts all the class kids. You can volunteer and use that to your advantage.

“[W]hen my kids were younger, I would take them to the park and start chatting with other parents there. Then when my kids started school, I used the flexibility of being a work-at-home-parent to volunteer for class parties and field trips. I have several good friends that are parents of my kids friends, that I’ve met by getting involved with the school,” says Julie Northrop of Northrop Enterprises.

Perhaps the best thing you can do, though, is to just say yes to other moms. Chances are you aren’t the only one looking for mommy friends, so when another mom invites you to join her (or the whole class of moms) for an activity, saying yes is the easiest way to start down the path towards making friends.

“[W]e had a mom in my son’s kindergarten class who took it on herself to be social chairman and invited us to movies and other outings. I went on a couple of those and got to know a mom who’s my best friend to this day. So when my daughter started school three years later, I became that class’s Mom Who Invites Everyone Everywhere. Build it, and they will come, I say,” says Roxanne Beckford Hoge of One Hot Mama.

So, are you ready? Go make some friends!