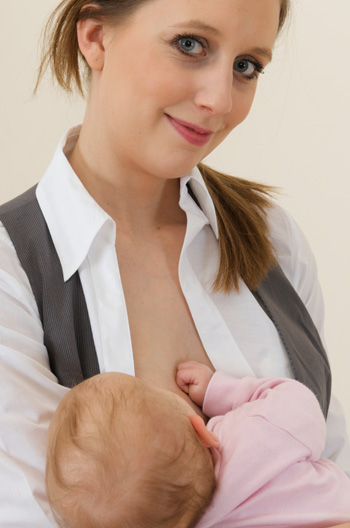 Grossed outFor others, seeing a baby suckling its mother is nothing short of disgusting. As mother of one Mariesa said, “It absolutely disgusts me. Creeps me out. Ick!”

Proponents of breastfeeding say that all moms are trying to do is feed their baby.
“Think of the baby whose only nutrition is breastmilk (a baby under 6 months old) and the Mom had to go out, just fed the baby before they left, the baby is well rested. So they are out and all of a sudden the baby starts to cry, not a fussy gas cry, but the cry that makes every Mom want to rescue the child. Does that woman have a choice?” asks Kathleen Kerber, mom of two.Other moms agree. “This is a matter of survival. An infant needs to eat, a lot. Most every 3 hours (and that’s from start time to start time, not from the end of one feeding to the beginning of another) some more often than that. If they are going through a growth spurt maybe every 2 hours or less. What is a mother supposed to do? Never leave the house? Not travel to visit grandparents who may live across the country, can’t grocery shop, can’t visit friends, can’t get out of the house even if it’s just to go to the mall?” said Sarah Russo, mom of one.

For many, breastfeeding is okay as long as the mom is discrete. “Modesty and respect are what seems to be lost here. A small receiving blanket, a shawl, or even a large men’s t-shirt would cover the activity details and allow the mother to nourish her child. Everyone knows what is happening, but the “shock value” is removed and all viewers can focus on the child and the beauty of a nursing mother instead of the sexual aspect of the mother’s breast on display,” says Deborrah Cooper, 40, mother of two daughters.

So is breastfeeding in public taboo? Eighty-eight emails came in when regular people were asked for their opinion. Only a few said they didn’t want to see any breastfeeding in public. Several others said that their discomfort with seeing it was a personal problem. “Actually, yes, seeing a breastfeeding mother in public does make me a little uncomfortable, but that is my problem, not theirs. Just because someones actions make us uncomfortable does mean that they should have their rights interfered with,” said Steve Kubien, dad of two.And as some moms pointed out, the United States is a free country. “So breastfeeding moms make some people uncomfortable? Too bad! I don’t particularly enjoy seeing people pick their noses, scream at their kids, make out in public, wear too-small clothes, plaster their political beliefs all over their bodies/cars/lawns. But I’m still damned glad I live in a free country,” says Jenna McCarthy, author of The Parent Trip and mom to two daughters.

Should You Give Another Parent Advice? A Flowchart