If parents who cloth diaper have always struck you as super-crunchy, you don’t know the new face of cloth diapering. Forget diaper pins, plastic covers and awkward pre-foldeds. Cloth diapers today operate like disposables, fastening with Velcro or snaps. Except, they can save money and leave baby bottoms drier. This isn’t tree-hugging, incense-burning, hemp wearing, it’s smart parenting. Here’s what happened when I tried cloth diapers for a few weeks. 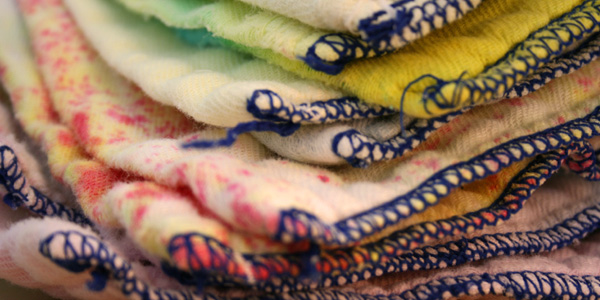 I heart cloth diapers. I never thought that would be true, but it is. When a PR rep for Fuzzi Bunz offered to send me a sample, I agreed, because then I could see what they looked and felt like. Then I tried the diaper on a whim one day. It was surprisingly easy. So easy, in fact, that I tried it again the next day, and the next after that. It was then that I began to seriously consider switching to all-cloth.

But would Fuzzi Bunz, with their patented pocket design, be the ultimate for us? It seemed to be too soon to tell. So I ordered a BumGenius. And a Mother’s Touch. And a SwaddleBeez. All in a matter of days.

By the time I had all four, I was cloth diapering for most of everyday. A few more, and I would have a days worth. Ultimately though, having enough for two to three days would be ideal.

All of the diapers I tried had their pros and cons. Of the pocket designs, Fuzzi Bunz was my favorite since they seemed to hold the insert the best but the snaps can be tough to get the right fit. Still, that remains a favorite.
Mother’s Touch had the coolest fabrics for the designs, which is great for showing off. But the pocket is open on both ends and there are more snaps then I could ever guess what to do with. Still, we love to take our daughter out in our very cool diaper.

BumGenius was the only all in one design I tried. It was also the only one with Velcro. Both features made it the easiest to use. But, since it is all in one, it takes longer to dry, which can be a bit of a pain. I also tried the BumGenius one size diapers, which are pocket diapers. I like their all in ones better, for the convenience factor.

SwaddleBeez is a pocket design with snaps. It’s biggest plus is how fitted it was. That makes it ideal for overnight usage. The caveat? Because it’s so fitted, it can be hard to get the insert in.

We’ve used cloth diapers overnight without added inserts several times without incident. But, adding a little extra padding can guard against leaks, if your little one tends to wake up wet. Keeping the diapers on the tightest fit possible is essential to leak avoidance, which we learned the hard way after my husband tried a “more comfortable” setting.
What else did we learn? Generally, poop rolls right off the diaper into the toilet with a quick shake-shake. Don’t use fabric softener or dryer sheets as it will make the poop stick.

It will take a while to convince everyone else that you aren’t nuts. But once they understand, they will really understand.

44 mins ago
by Alicia Kort