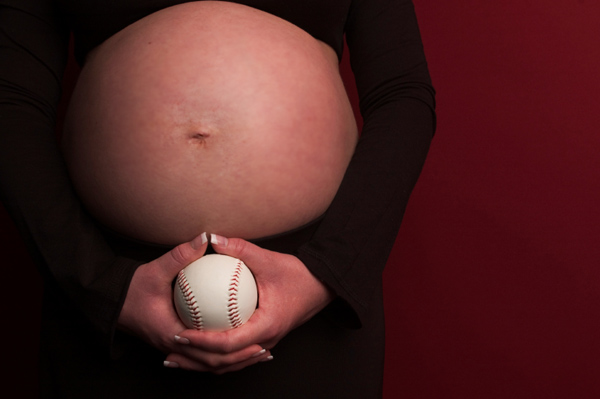 For as long as I can remember, I have thought of myself as a tomboy. You might think that pregnancy would have momentarily rid me of this
belief about myself. It is, presumably, the peak state of femininity — or at least the peak state of womanhood, the incomparable expression of what separates gals from men. And yet carrying a
child did nothing to free me from the conviction that I am more masculine than feminine. Instead, it sharpened it — for the first six months, anyway.

Mark, my partner (I’m also too unsentimental to get married), developed a term for my attitude. He called it “the macho pregnancy.”

But I am now in the end stage, the preposterous stage, the stage where the fundamental inelegance of my condition cannot be ignored and machismo is completely out of the question. Being macho
requires a certain cool, and it is hard — very hard — to be cool when you’re wearing stretch pants. Recently, a dear friend proposed I be towed out to sea to start my own artificial
reef. Another began calling me “Goodyear.” I’ve become a hopeless dependent, relying on the kindness of strangers to give up their subway seats, open doors, and in one especially awkward instance,
tie my shoes (in end-stage pregnancy, the feet are apparently more elusive than the cervix). My doctor assures me it is normal — depressingly average, even — to have gained 25 pounds on
a 5-foot-6 frame by week 36. But these extra pounds have both revealed and weakened every kink in my posture, my core muscle strength, my gait. (About five weeks ago, my hips gave out, driving me
to a fabulous physical therapist named Isa, who observed: “Girlfriend, you walk all wrong.”)

Worst of all, I’ve become stupid in these final laps, and intellectual helplessness is far more humiliating than physical helplessness. Words desert me. (Terms I forgot in the last 24 hours:
self-aware, neonatal, and shelf.) The basic skills of my profession elude me (filling me with the panic of those dreams in which we’re asked to do things we cannot
— conduct the New York Philharmonic, play professional basketball). My prefrontal cortex, at long last, has been hijacked by hormones. In her best-selling book, The Female Brain, Dr.
Louann Brizendine says the brain shrinks by about 8 percent during pregnancy and doesn’t return to its full size until six months after the baby is born. The image suggests that our brain loses
computational and reasoning power, but that’s not what it feels like. What it feels like is a case of brain termites.

Up next: Jennifer tells us more about her macho pregnancy