Until the last couple of summers, I had very little experience with poison ivy. I had trouble even identifying it! It’s not that poison ivy didn’t exist in my home state, it just wasn’t common in my area of the state. Where I live now, poison ivy is much more common and much more of an issue, some would even say a rite of passage. Even so, I — and my kids — managed to avoid it. Until last summer, that is. 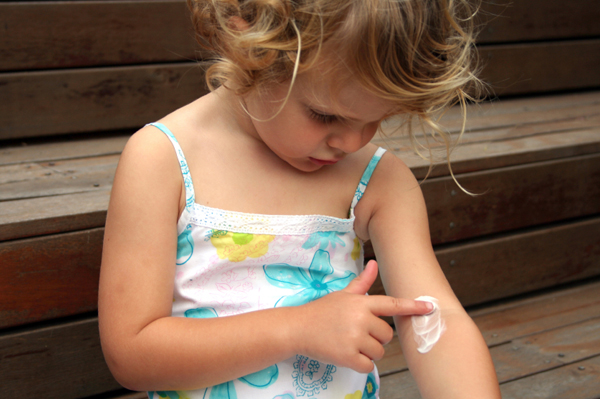 Last summer, while playing with a friend, Woody brushed up against some poison ivy and I was thrust into the world of Toxicodendron radicans. But not right away. It was several days before the first small lesions spread enough for us to recognize what it was.

After a trip to the drug store, we tried several efforts to keep the rash in check, but before we knew it, there were lesions on every part of his body. Woody was miserably itchy: he couldn’t sit still and had a hard time sleeping. Finally, a trip to the doctor for some ideas, after which we were slowly able to get the poison ivy under control.

>> Recognize poison ivy and remove it from your outdoor spaces

An education in ivy

After that experience, I decided to learn about poison ivy — how to identify it, avoid it, and, if necessary, deal with it. I became even more careful with the kids and checking out vegetation we were around. I vowed I’d be able to head off such an experience in the future. That attitude — because the best way to deal with poison ivy is not to get it in the first place — failed to take into account a pre-teen’s emerging independence and not wanting to tell his mom that he’s got this itchy spot on his torso. Until it really develops, that is.

Yup, Alfs has poison ivy, and bad. My education is being put to the test right now. We are in a multi-day effort to contain, control, and to begin the healing process.

So how does one deal with poison ivy? Carefully, of course. And…

I think we’re heading off to the doctor’s office tomorrow. Alfs’ torso is looking quite awful, so I think we need some medical help, but at least I think my efforts helped prevent the poison ivy rash from being even worse.

How to treat and avoid poison ivy, poison oak and poison sumac